he Leopard 44 is an innovative design! With an open forward cockpit you get a good breeze throughout the whole boat while you are relaxing on a mooring ball with a cocktail in one of the beautiful bays in the Virgin Islands.This vessel features 4 double cabins with ensuite heads plus a generator and AC, making it ideal for larger groups! All cabins are good sizes and well ventilated with plenty of storage space.

The spacious and comfortable salon has large windows with doors to both the forward and aft cockpits.
A unique feature is the open forward cockpit with direct access from the saloon. It is an ideal shady spot to sit and relax with a cocktail, or play a game of cards.

The main aft cockpit has a raised helm which leaves all of the space in the cockpit for relaxing and dining. Both the forward and aft cockpits are covered with a continuous hard top bimini.

There is a swim platform at the back of the boat with boarding ladder on the port side. 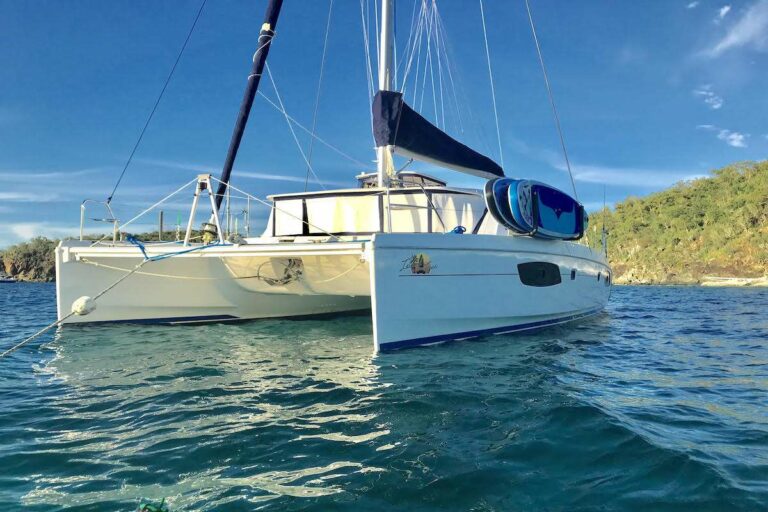 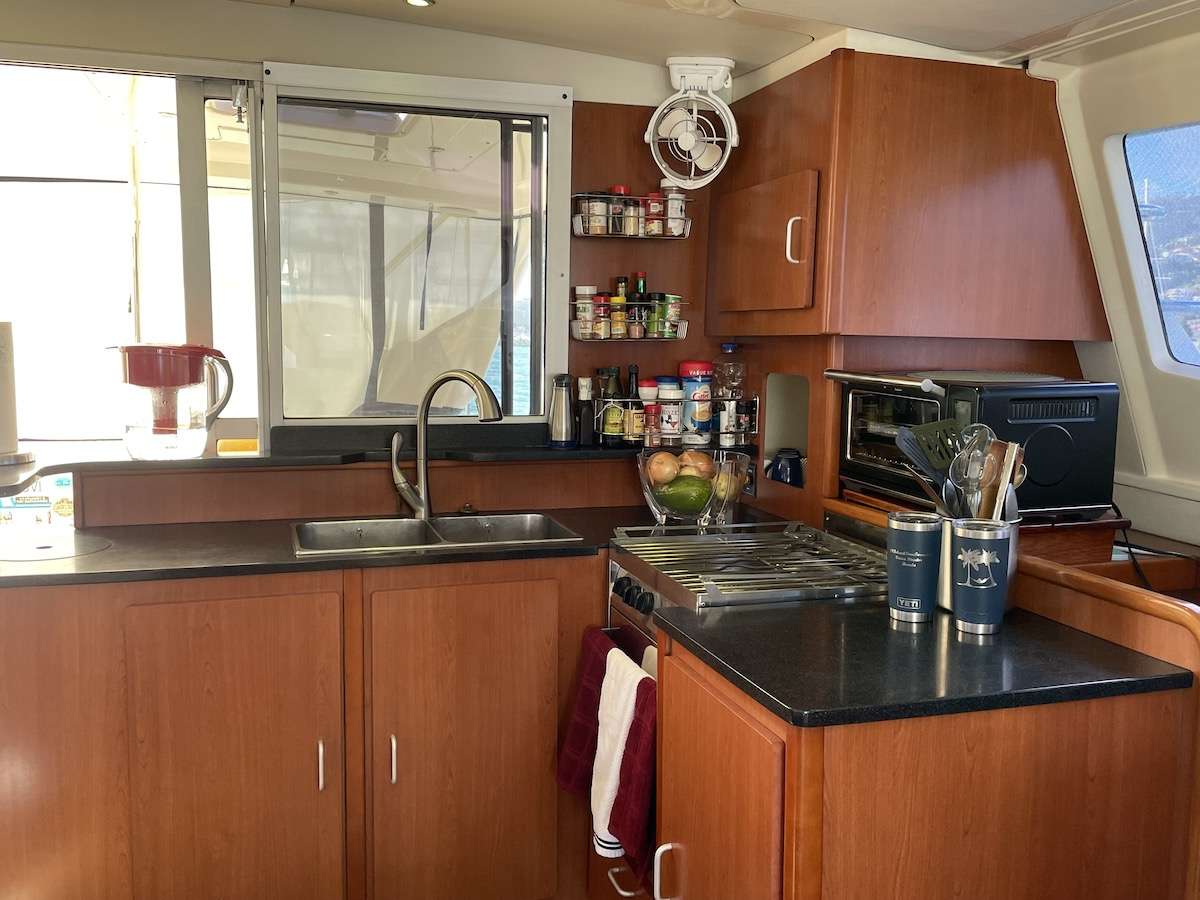 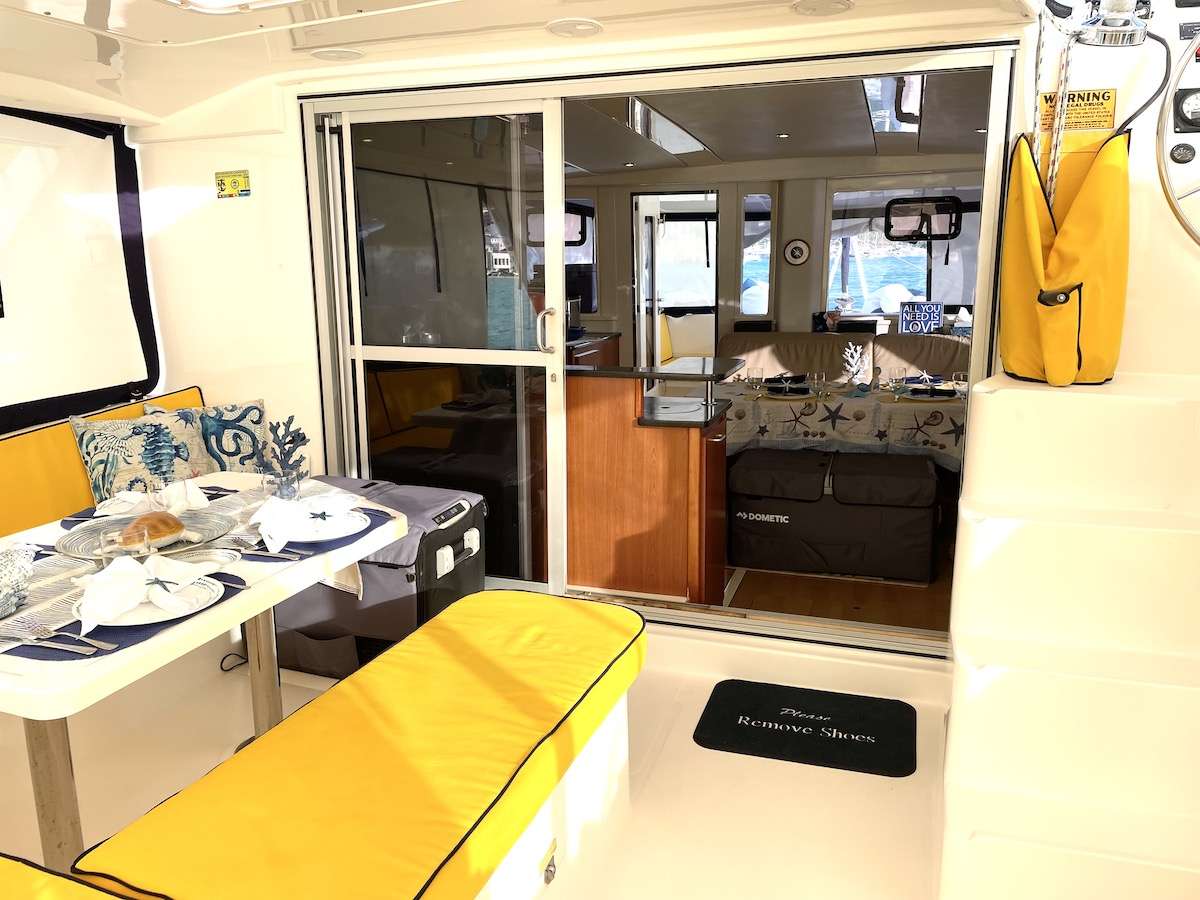 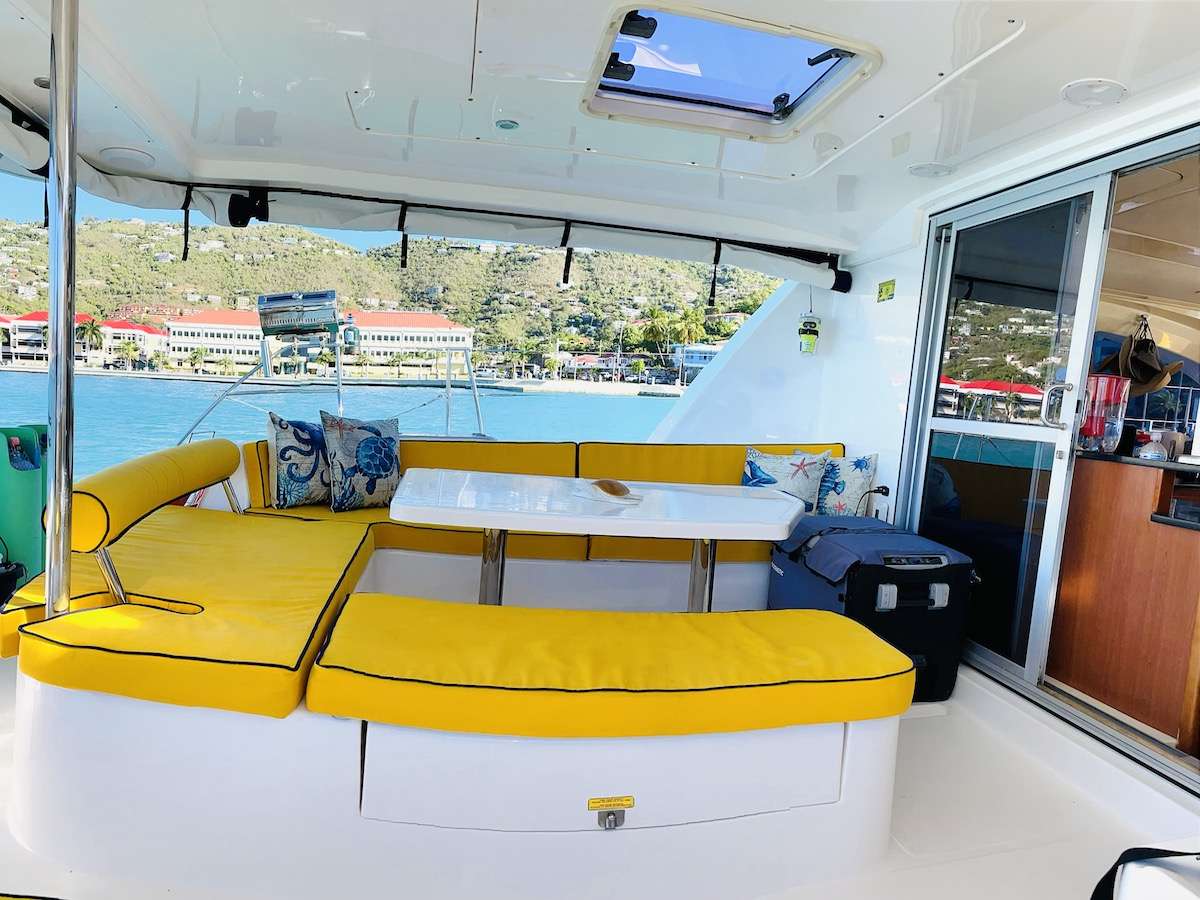 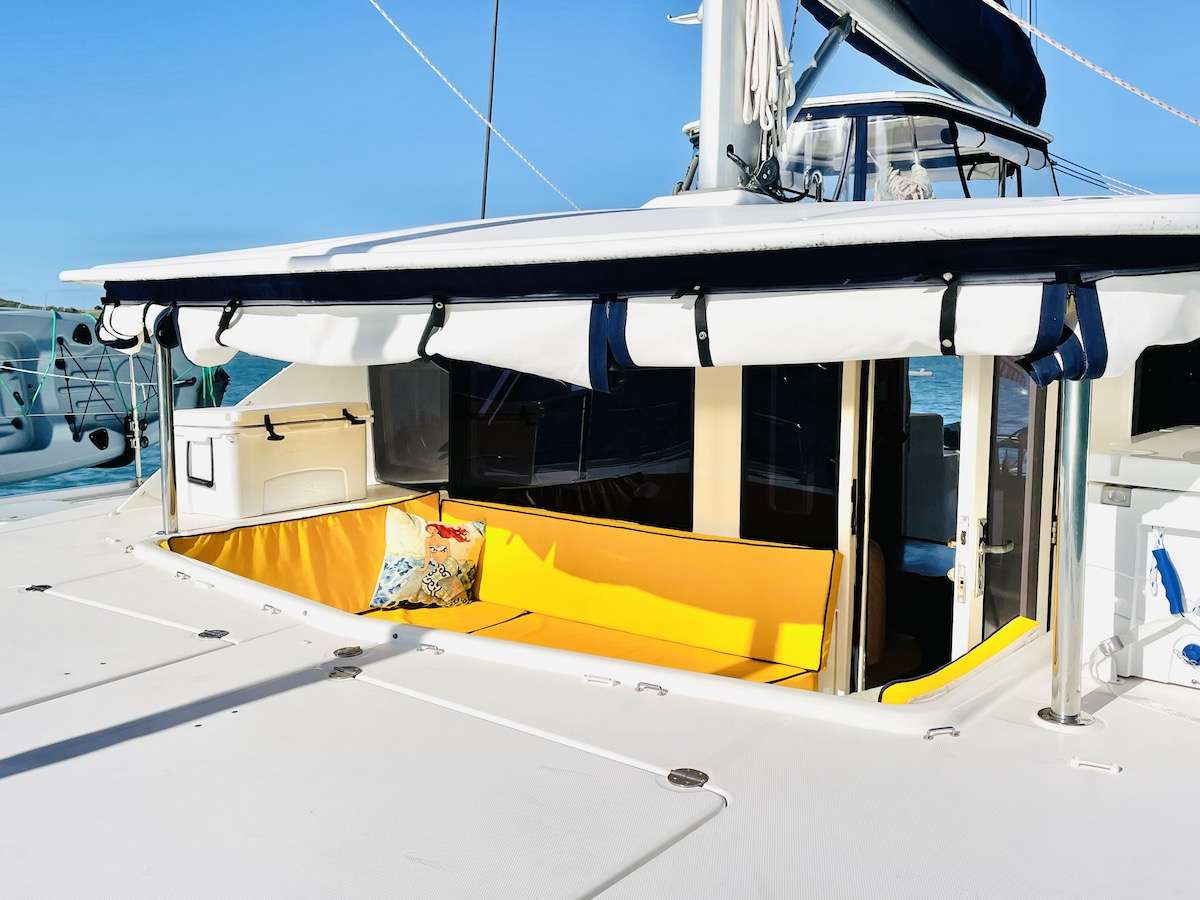 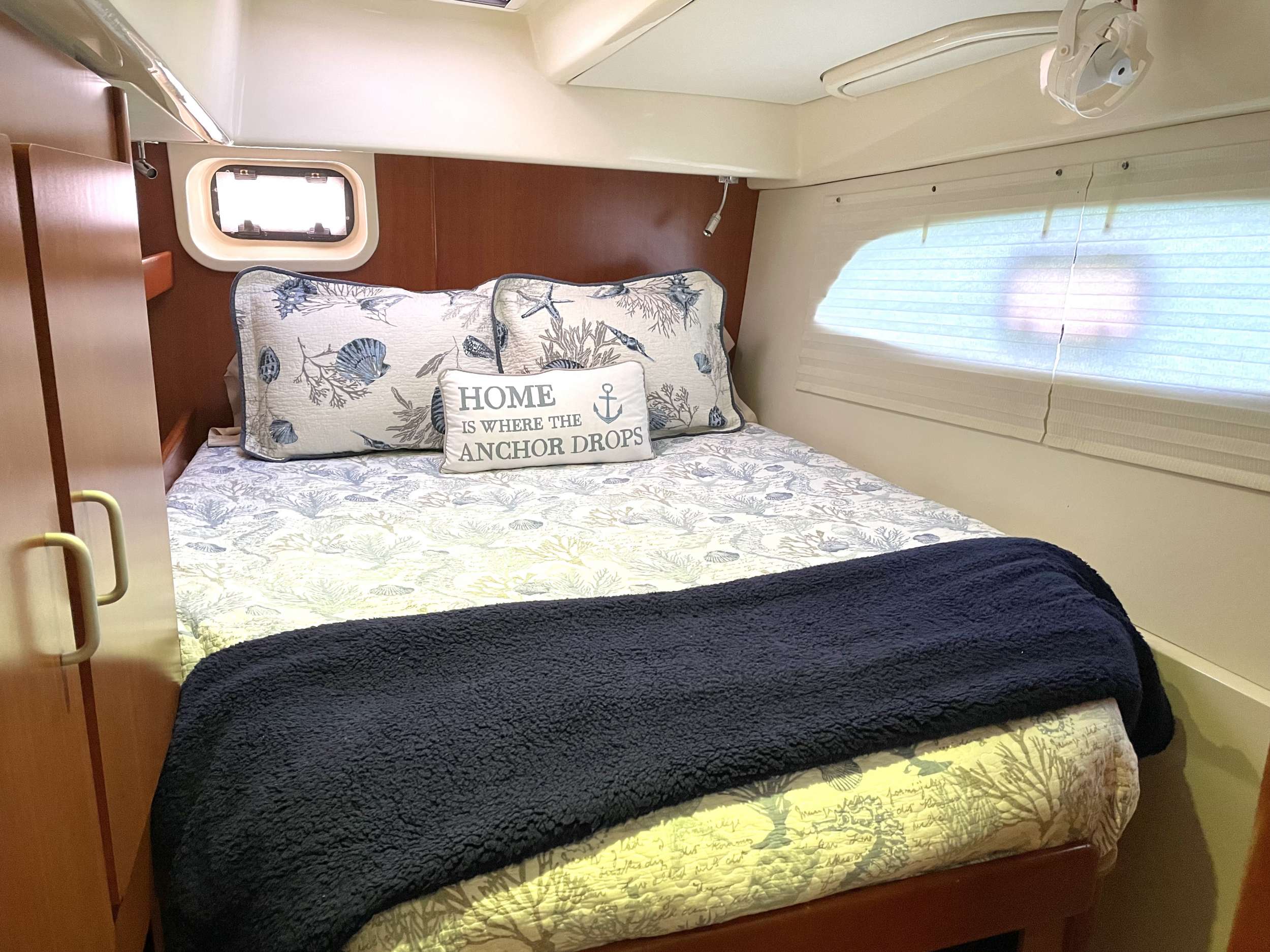 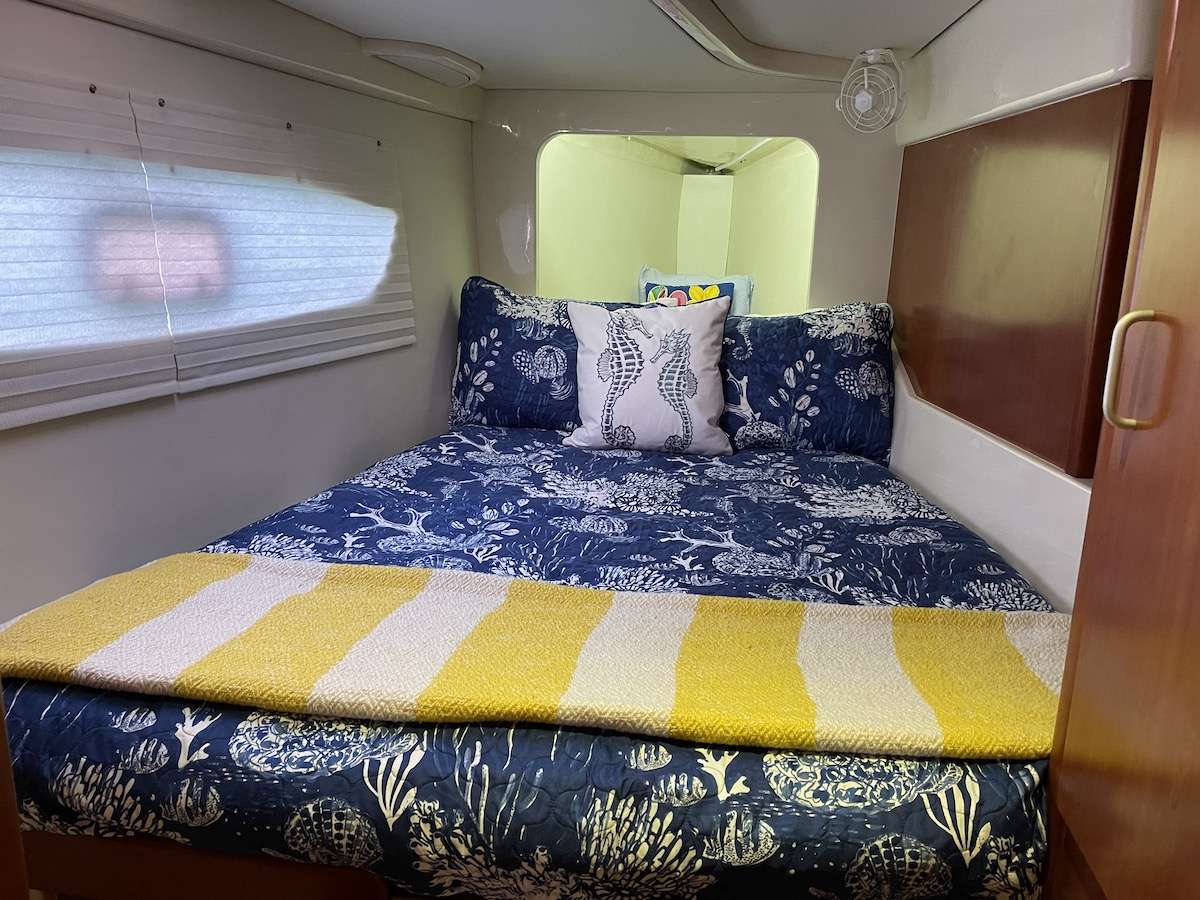 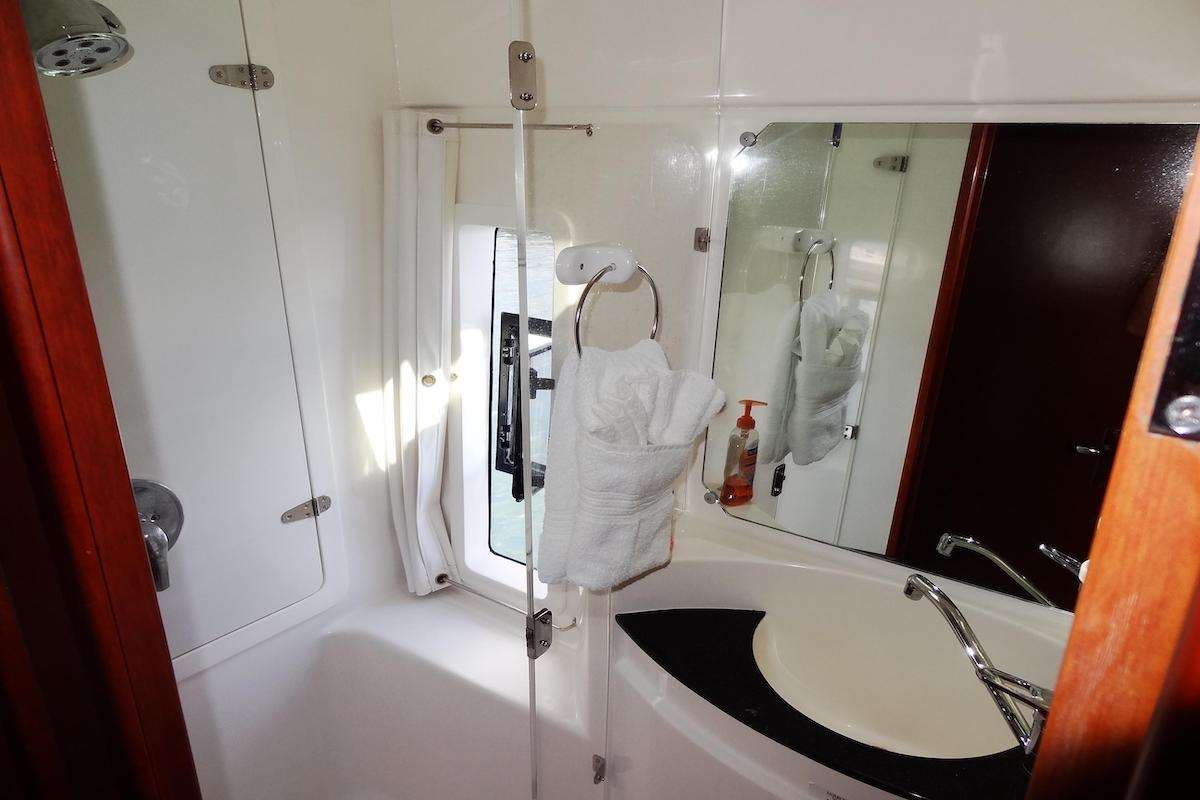 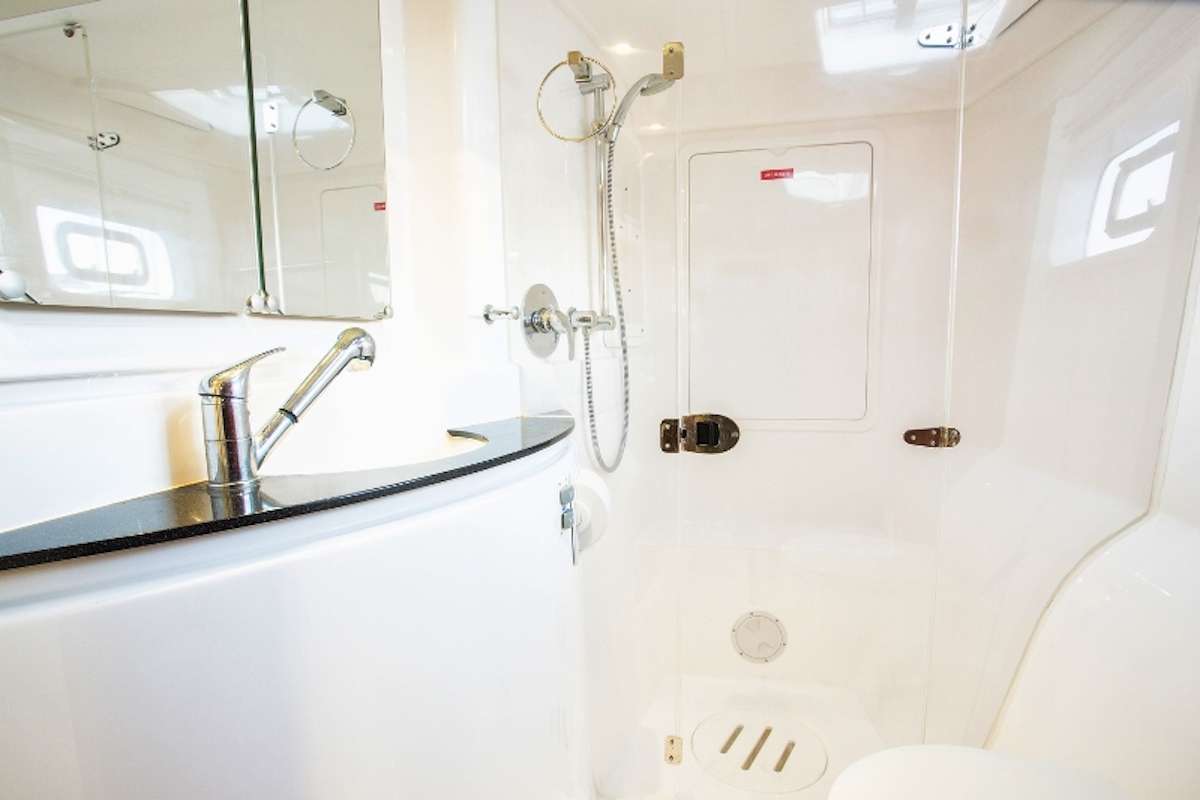 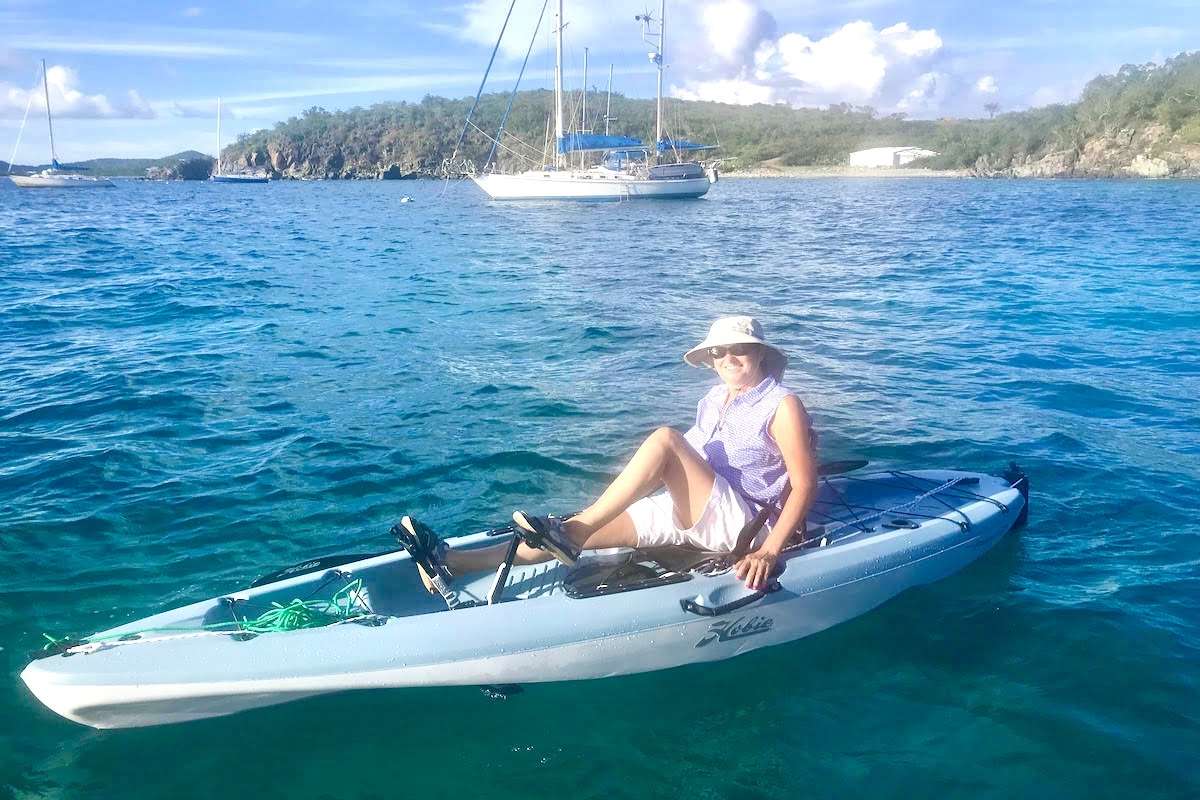 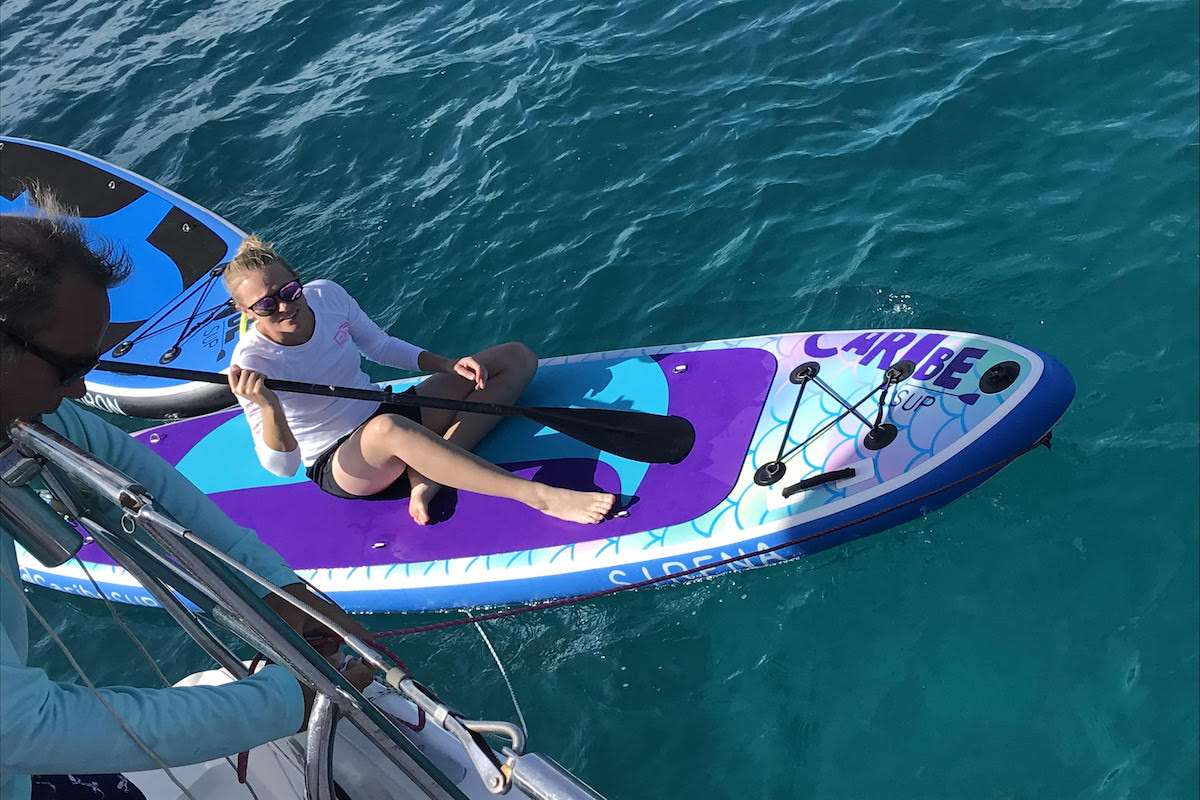 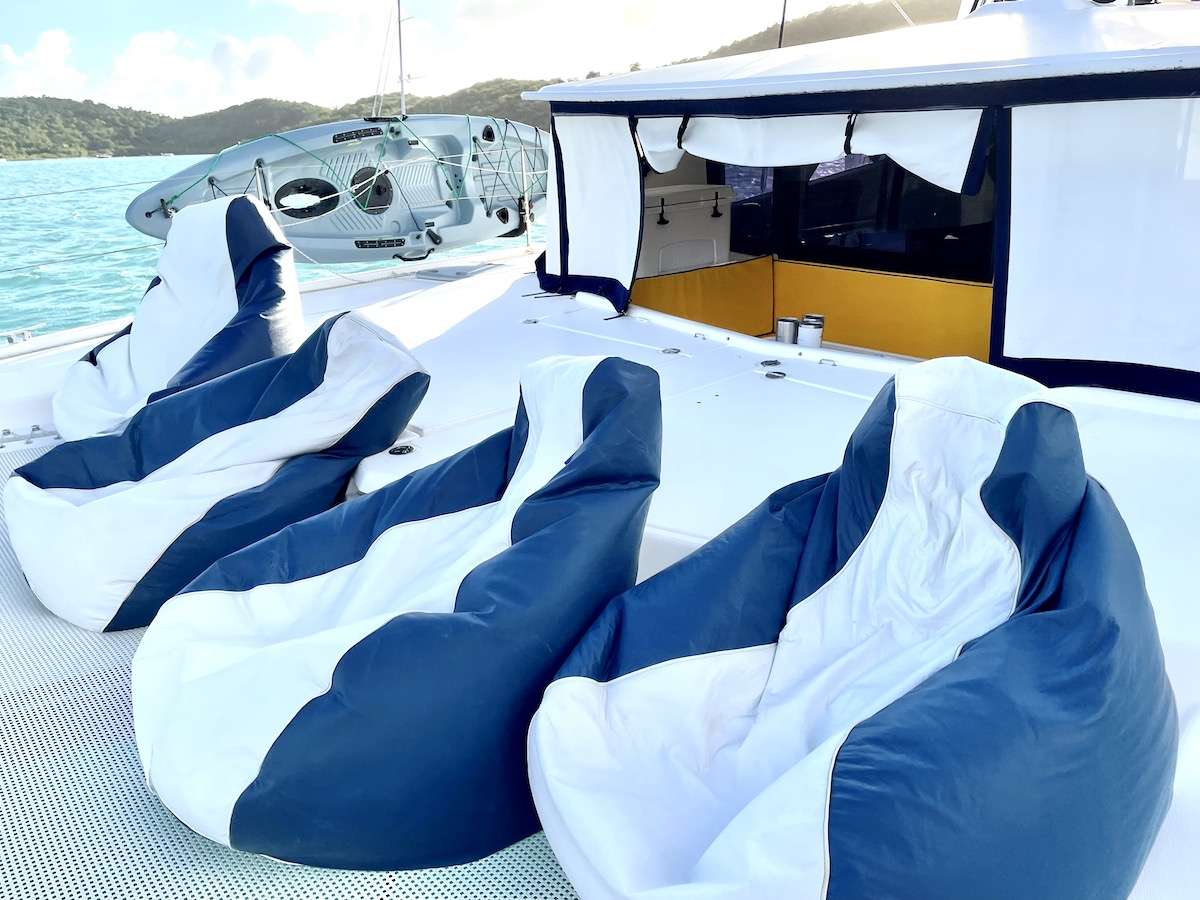 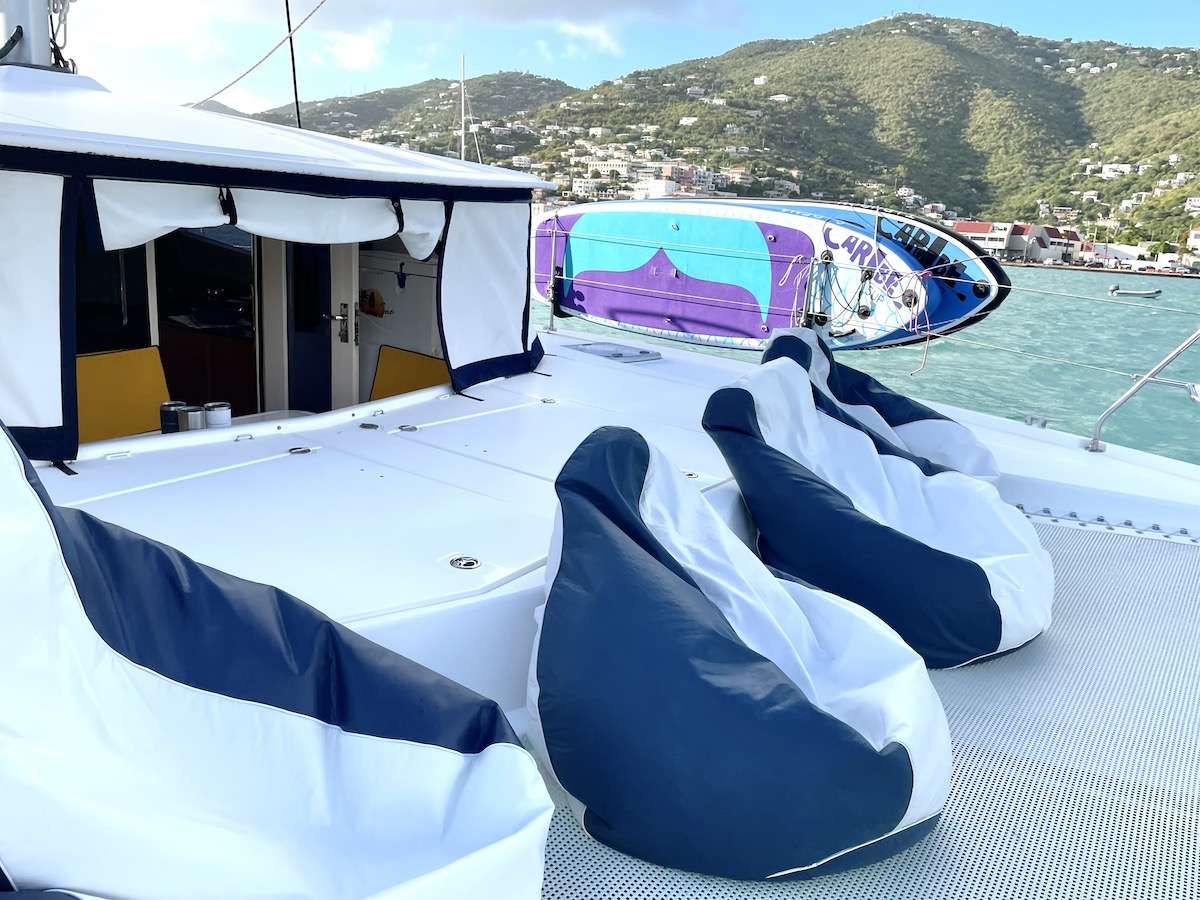 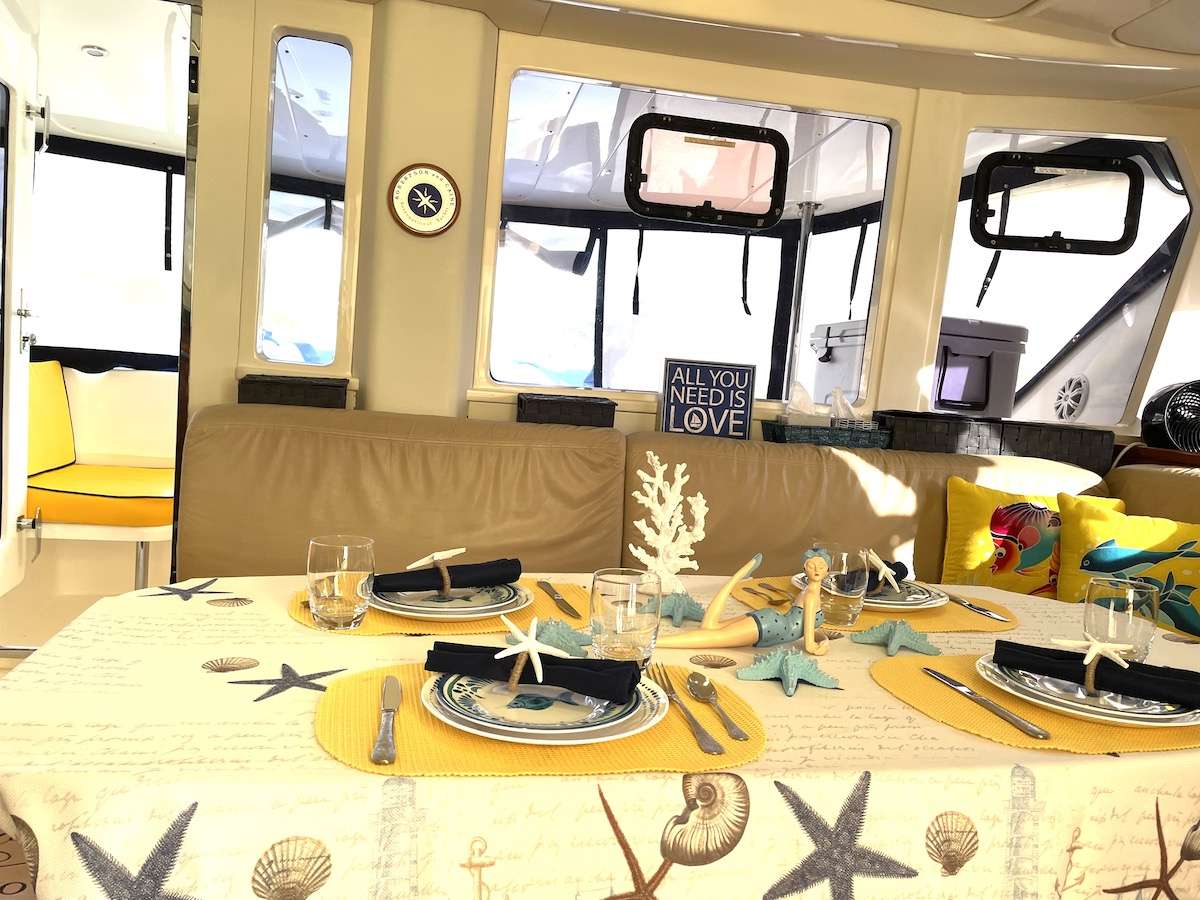 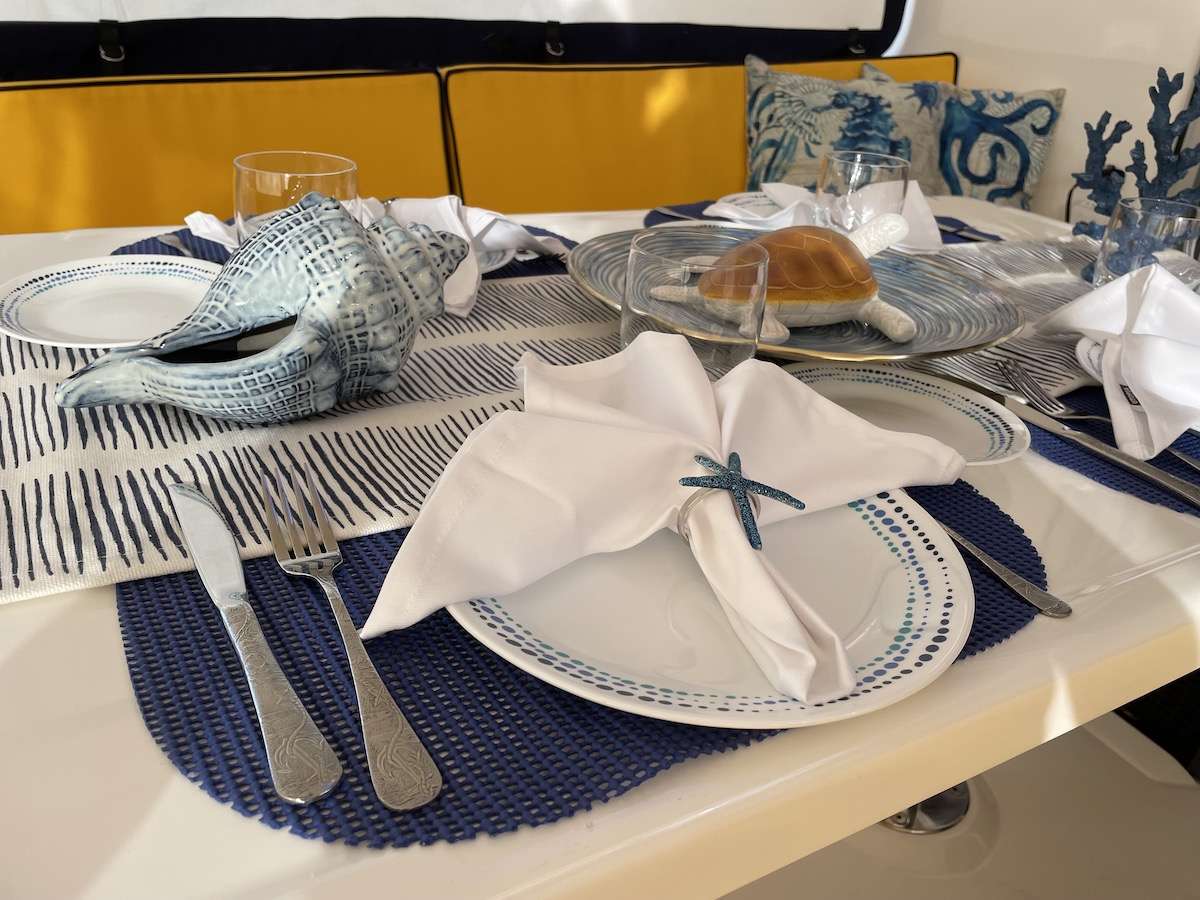 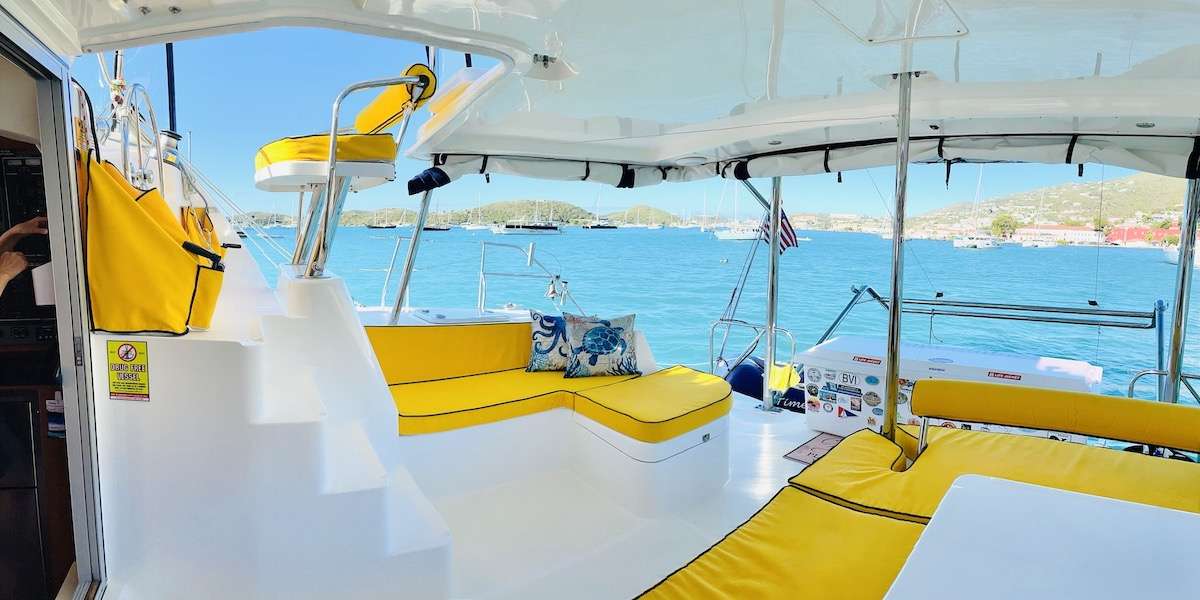 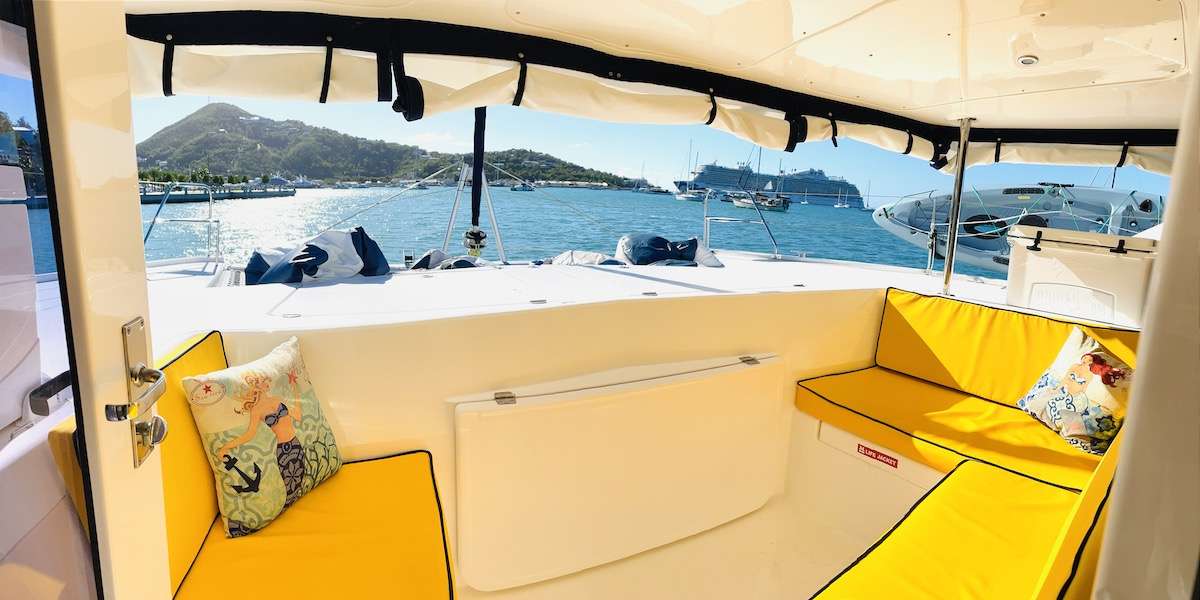 Captain Thomas grew up boating in Louisiana. He had an aluminum John Boat that he drove up and down the Vermillion River at 8 years old. Growing up Thomas learned fishing, crabbing and shrimping in the marsh and offshore with his father. As a teenager, Thomas was introduced to sailing by a couple in Galveston Texas and he fell in love with sailing. In college, he bought a Hobie 14-foot Catamaran and learned to sail. In his late twenties, he lived in Miami Florida and raced a Tornado (an Olympic Class Sailboat). He dreamed of one day living on a sailboat and sailing around the world.

Brenda grew up fishing on the banks of Toledo Bend Lake in north Louisiana. She loved the sea but wasn’t exposed to boats until she met Thomas. She enjoyed sailing with Thomas, but she always said that she would never live on a boat. Thomas prayed that she would change her mind.

After they got married, they bought “Sandy Key,” a 33-foot Beneteau. Almost every weekend they would take their kids and friends for a sail. Unfortunately, hurricane “Ivan” destroyed the “Sandy Key” after years of week-end sailing.

Work and life took them out of the sailing scene for a few years. Their daughter talked Thomas into getting a racing catamaran. They purchased a Hobie Tiger to race for a few seasons. It was a fun and enjoyable time traveling to races but life got busy, their daughter grew up and the Tiger was sold.

Thomas and his dad purchased a 28 ft Grady White fishing boat together. A lot of “guys week-ends” were spent fishing the waters near Venice Louisiana. At Venice, you can catch Tuna offshore, Red Fish and Trout in the Mississippi River Channel, and Bass in the fresh inland waters, all in the same weekend. Our freezers were full of fish for years. We sold the Grady when it was time to retire and start this adventure.

Brenda developed allergies to Bahia grass, pecan trees and oak trees, all of which existed in their yard. It was time to move! Brenda agreed to sell the house and buy a boat with the agreement that she would give it 6 months trial. Thomas made the boat as comfortable as possible with all the upgrades. It worked! They have lived on their boat now since October 5, 2018. It is their home. Thomas’ years of prayers paid off 🙂

They have sailed up and down the Caribbean for a couple of years to gain experience. Thomas obtained his Master Captain’s License. Now they share their boat life by chartering to people who are wanting an “Island Time” adventure.

We chartered with Captain Thomas and it was the trip of a lifetime.
We had two kids with us, and he went above and beyond to make sure everyone was relaxed and happy.
He cooked speciality pancakes for the kids each morning, played card games with them, and even taught our oldest daughter how to drive the boat.
He is incredibly knowledgeable on the islands, and we always felt like he was going the extra mile to make sure all of our needs were met.
We still talk about the gumbo he made for us; delicious! We have already booked our second trip with Captain Thomas and can't wait to be back down to the US Virgin Islands.

We did a private charter with Capt tom and had the most amazing vacation. Tom engaged so well with our kids, 8 and 11, and taught them so much about sailing. They loved it so much!

Since we had such a great experience, we chartered again and this time it was on Tom and Brenda's own vessel - Island Time. I never did believe that we could outdo the first trip but boy was I wrong. My family is hooked on sailing and highly recommend Tom and Brenda rto be your crew.

We just wanted you to know how much Mac and I enjoyed our charter on Island Time with you. You created a wonderful adventure for us and we hated for it to end! Every detail ws perfect. From the boat with all the comforts of home to the itinerary with a mixture of sailing, water activities and island stops - we couldn't have asked for more.

I was more than pleased with our food selections as you catered to our food likes and allergies. it was like being on a mini-cruise ship. Mac enjoyed getting his hands on the wheel with Thomas and Brenda, you kept the bot tidy and clean while making sure that each of us had everything we wanted.

The children enjoyed the dinghy trips to the beaches, the water toys and diving off the front of the boat, while the adults chilled out on board enjoying the ambience and the peace and quiet.

We will definitely be back

Captain Thomas and his lovely wife Brenda are very gracious and attentive hosts.
We traveled to a variety of bays & coves from St. Thomas, St. James and St. John!

Last but not least the food was delicious!