Enjoy the beautiful scenery and gorgeous sunsets aboard this modern catamaran. This vessel is the perfect for relaxing during your next vacation in the US Virgin Islands.

BelieveN’s exterior styling is adapted to the modern appearance of its award-winning big sister the Leopard 50.
It features expansive side windows, a continuous hardtop cover, and what has quickly become a signature, the upper-lounge area affording the ability to enjoy the beautiful scenery and gorgeous sunsets.

The interior design has modern contrasts, indirect and classy finishes bringing more luxury to this size vessel. With windows everywhere it ensures the natural light is amplified thoughout.

The salon has a generous skylight and has a roomy L-shaped galley ideal for any chef to provide a real treat with a comfortable sitting area to be enjoyed. 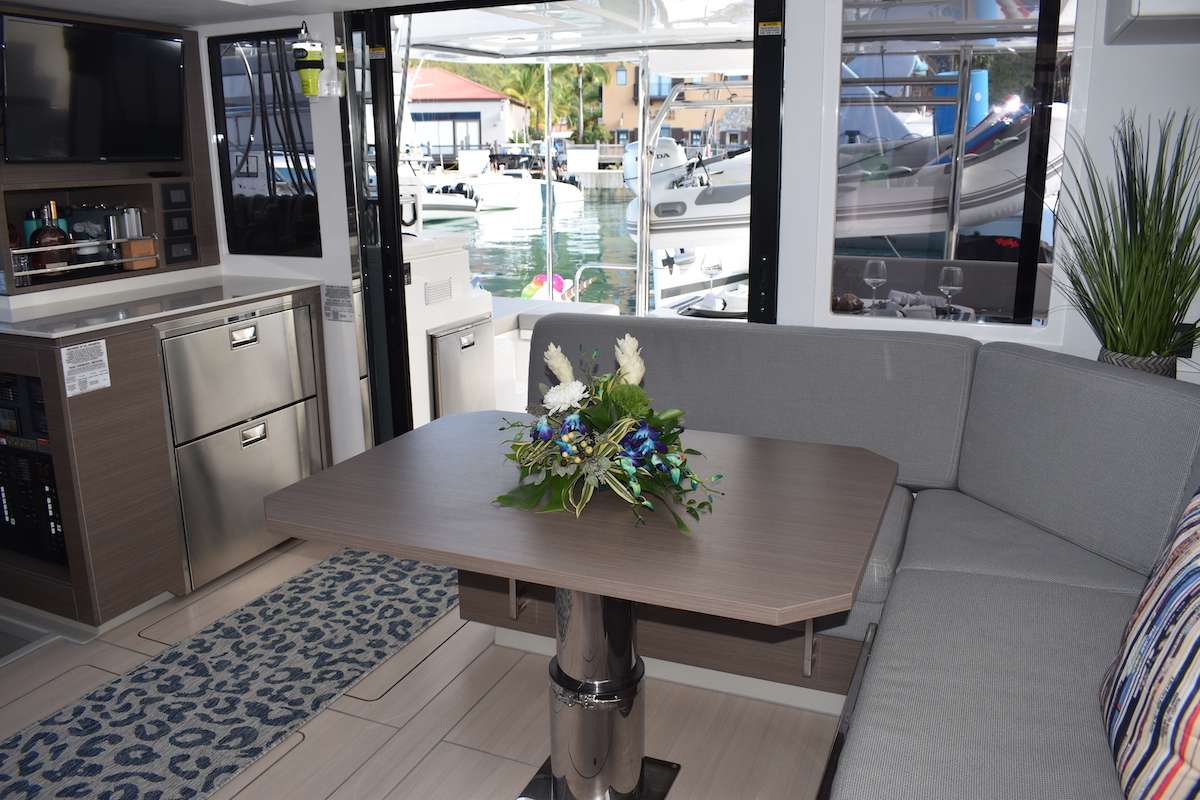 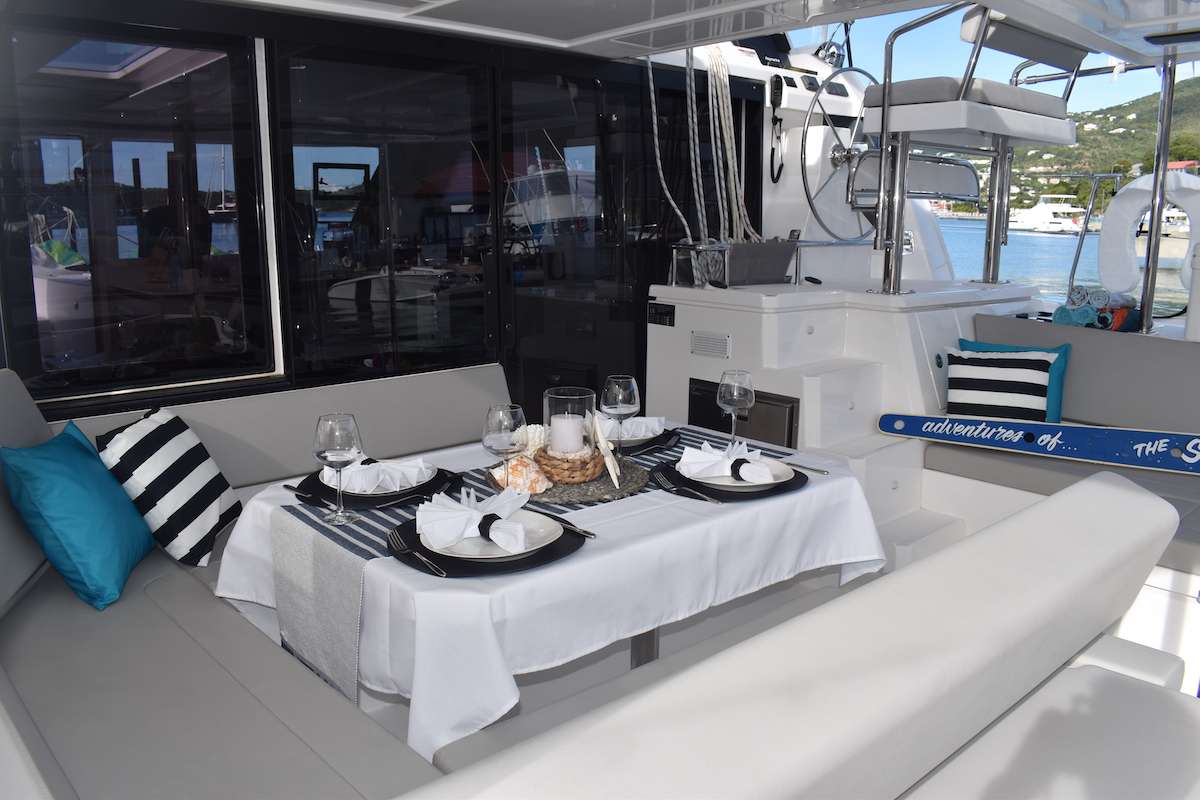 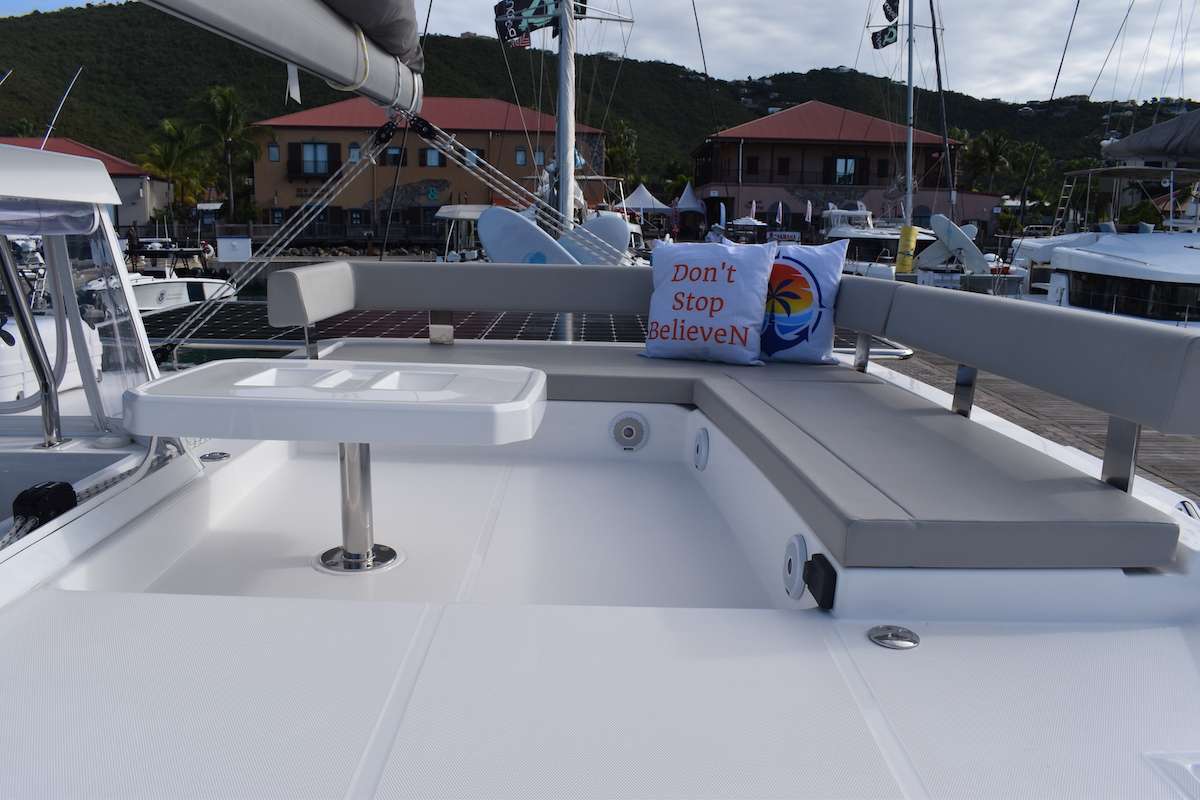 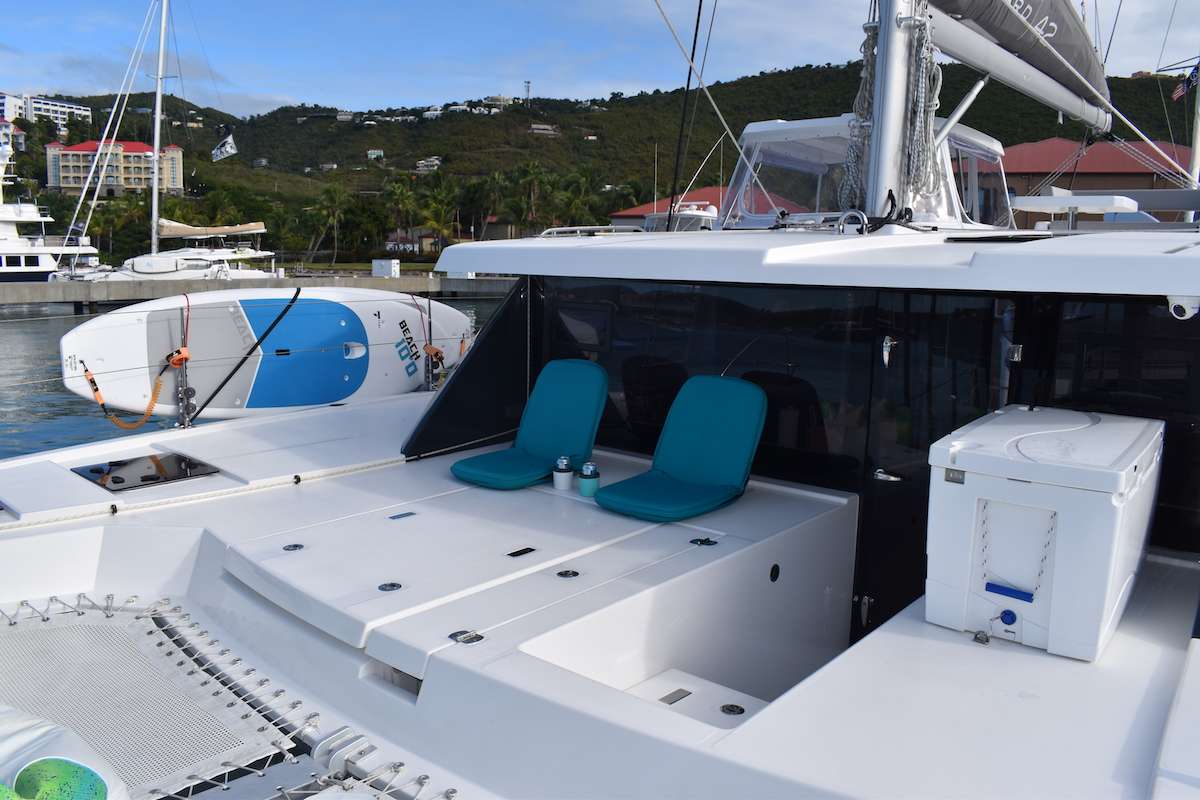 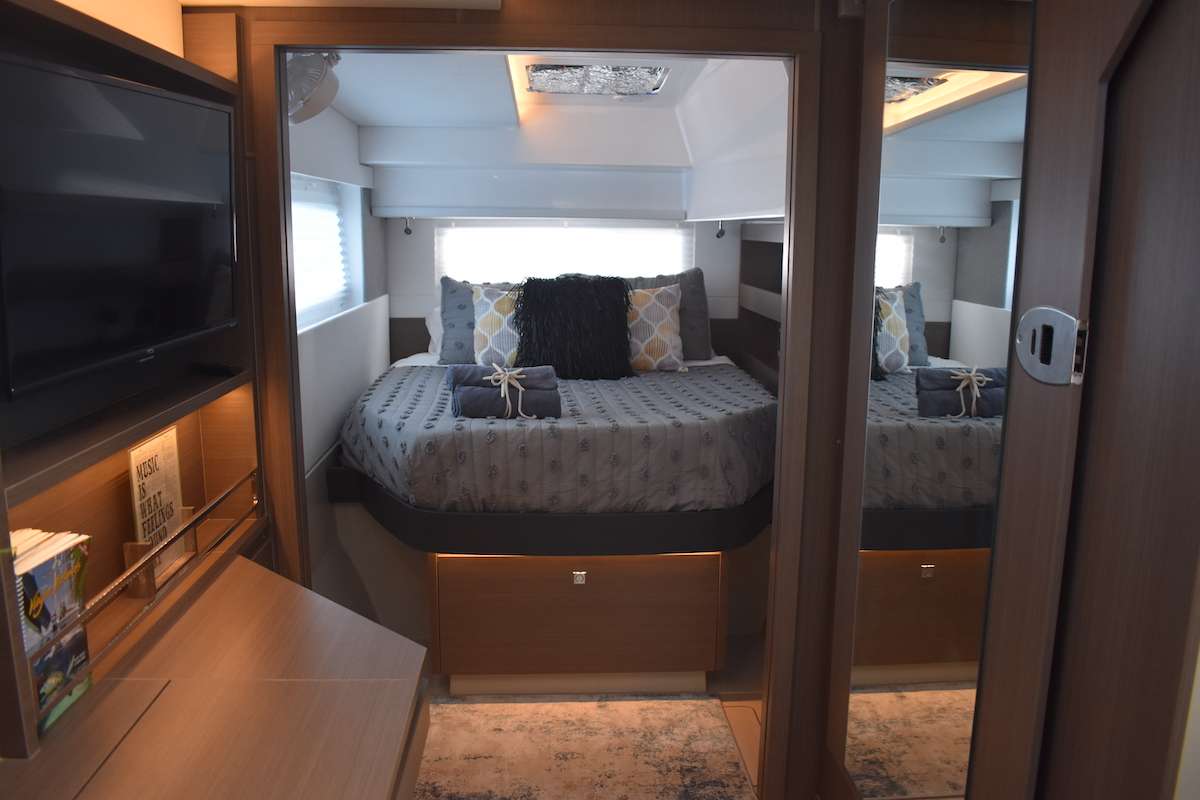 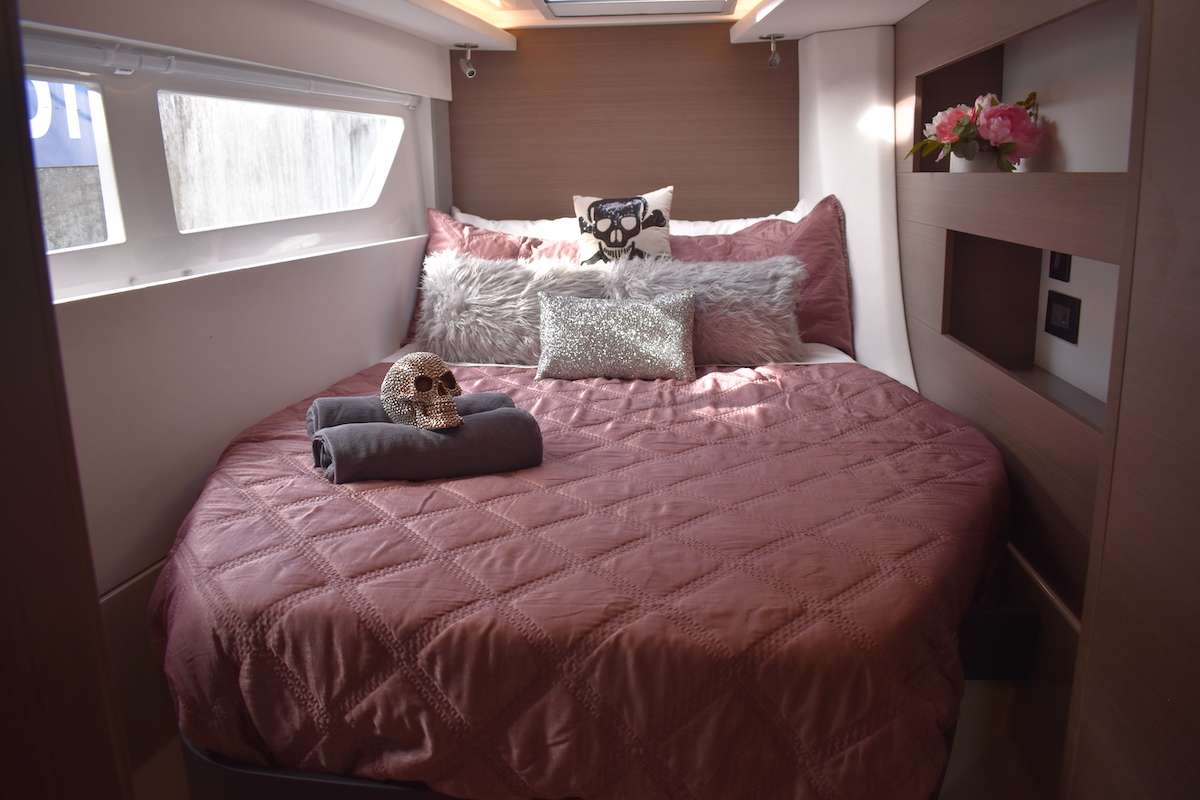 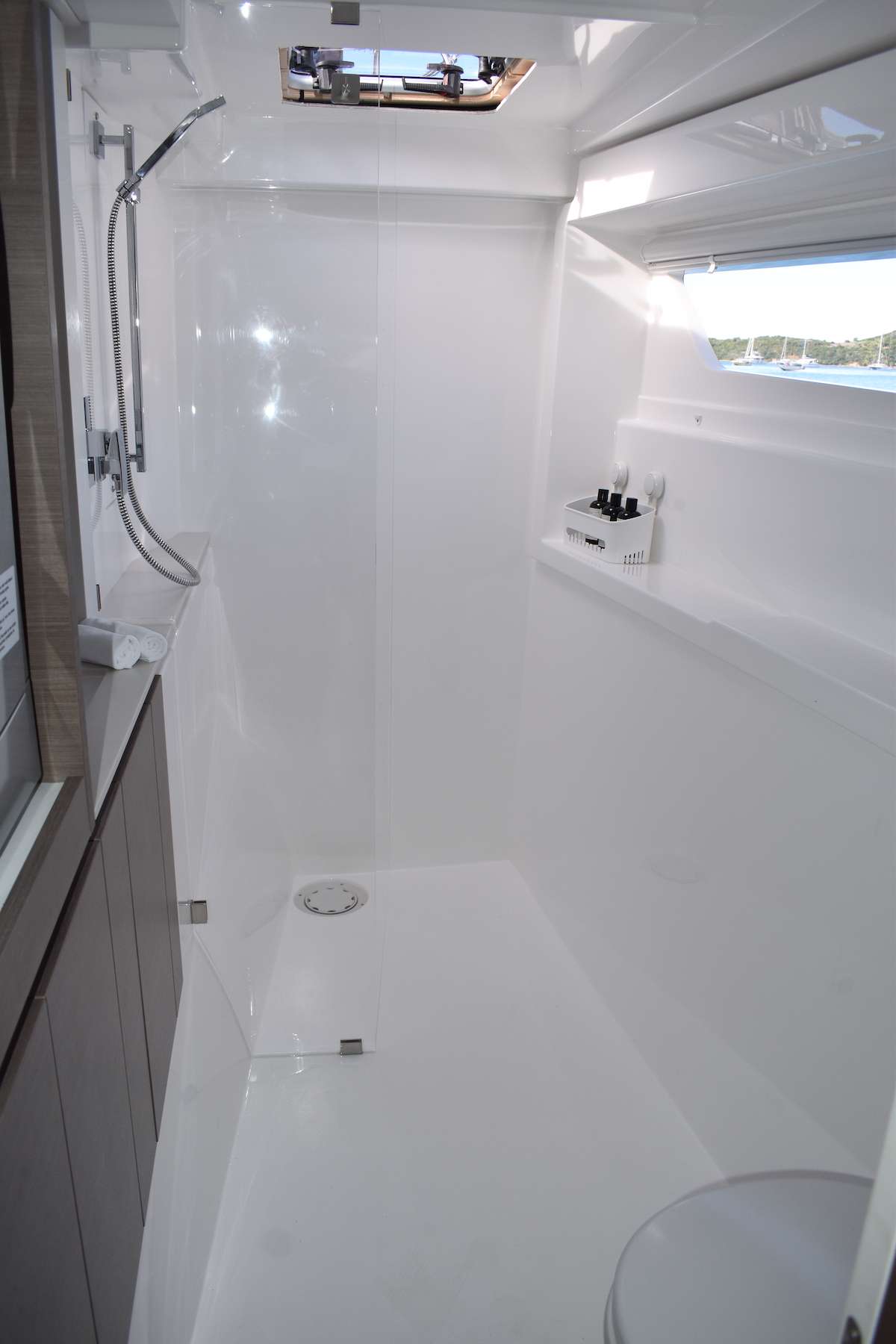 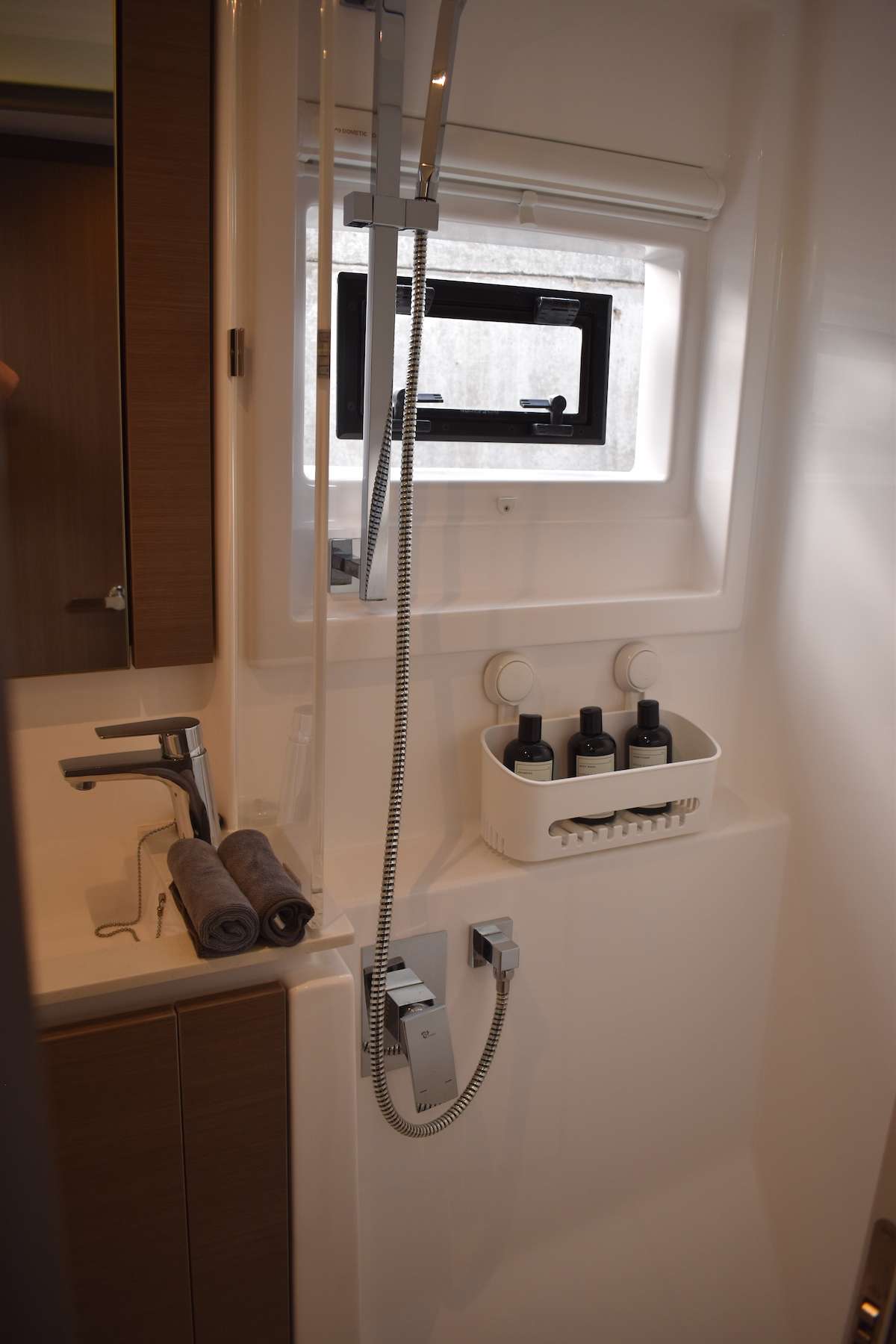 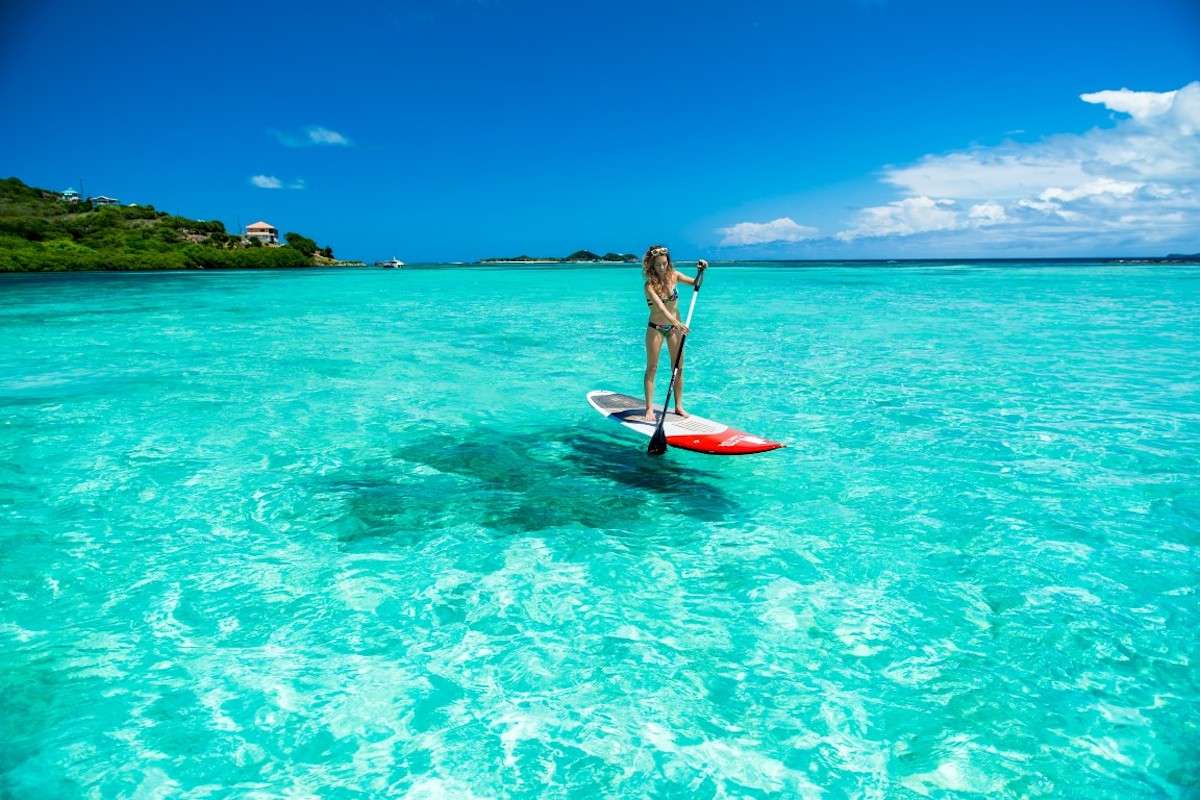 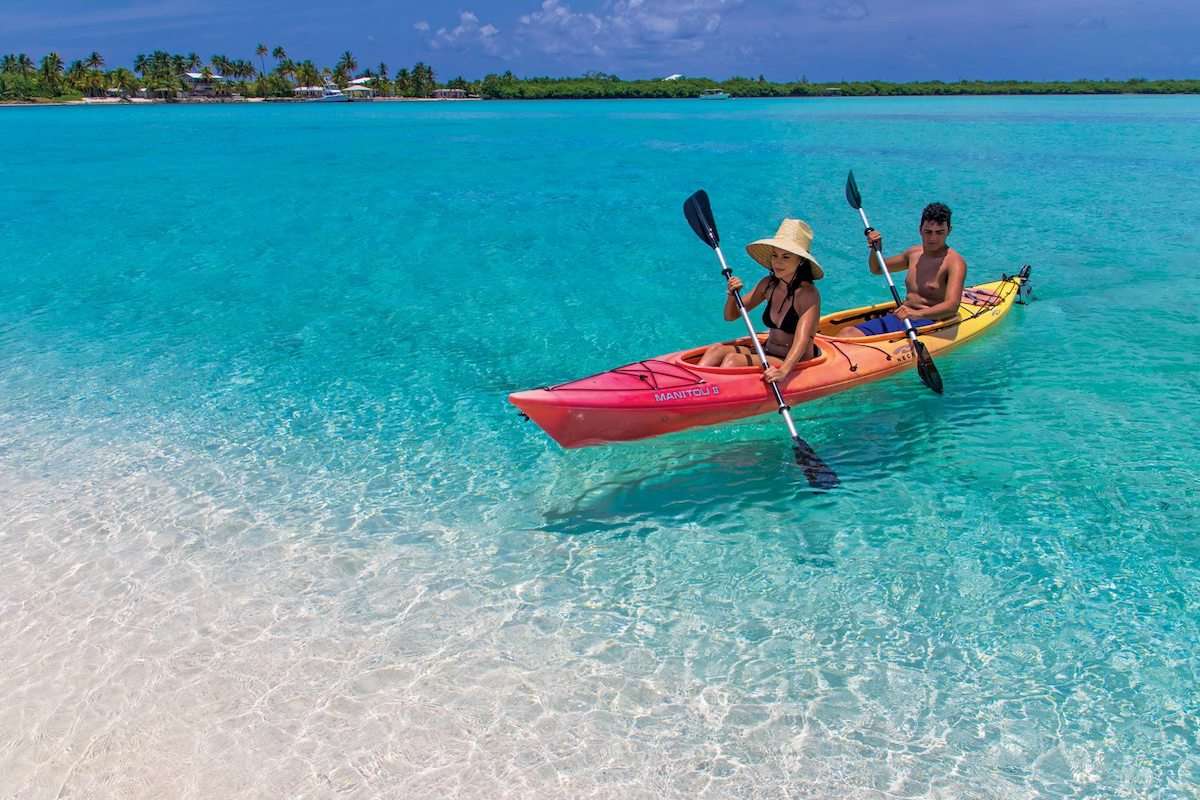 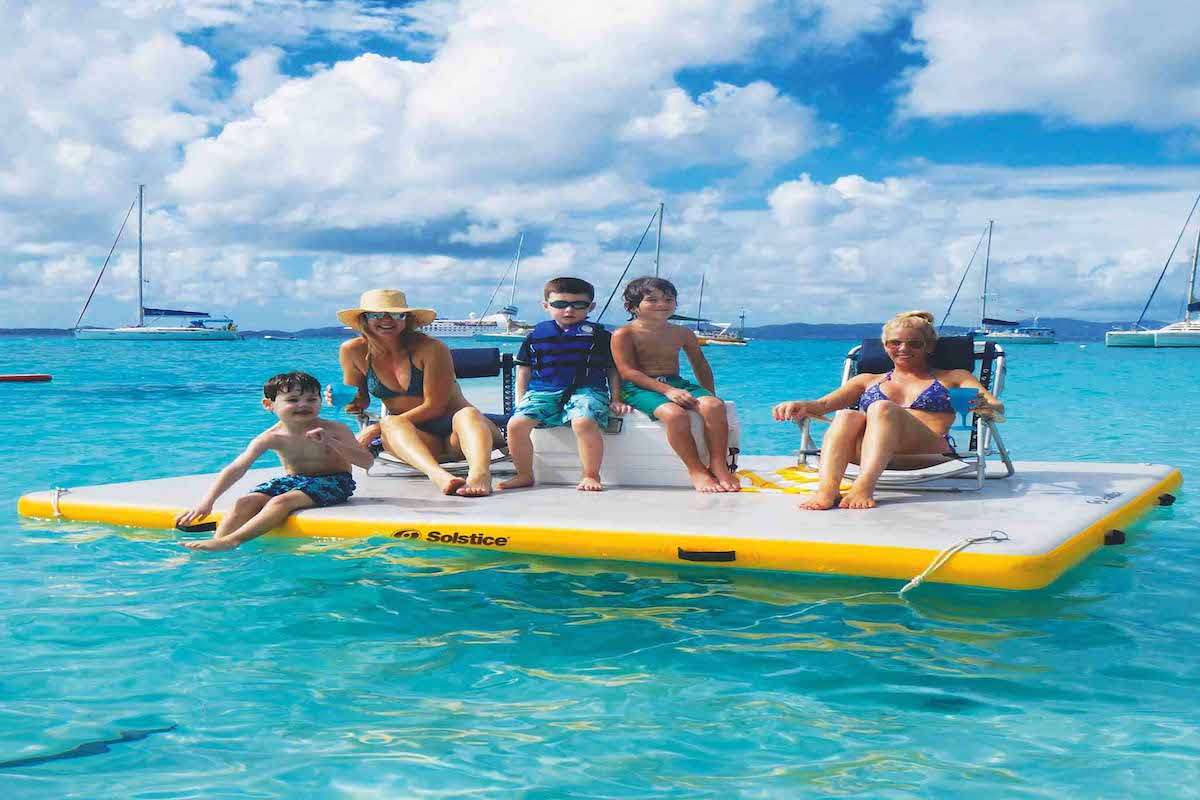 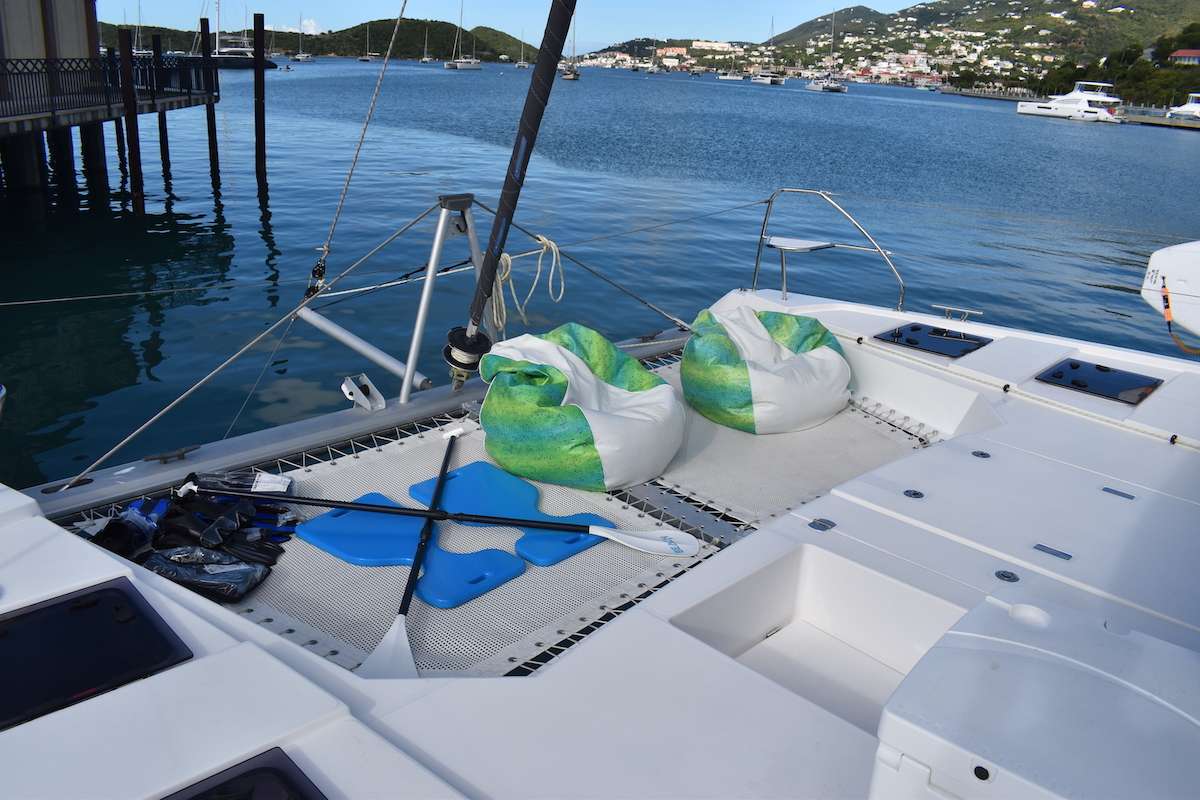 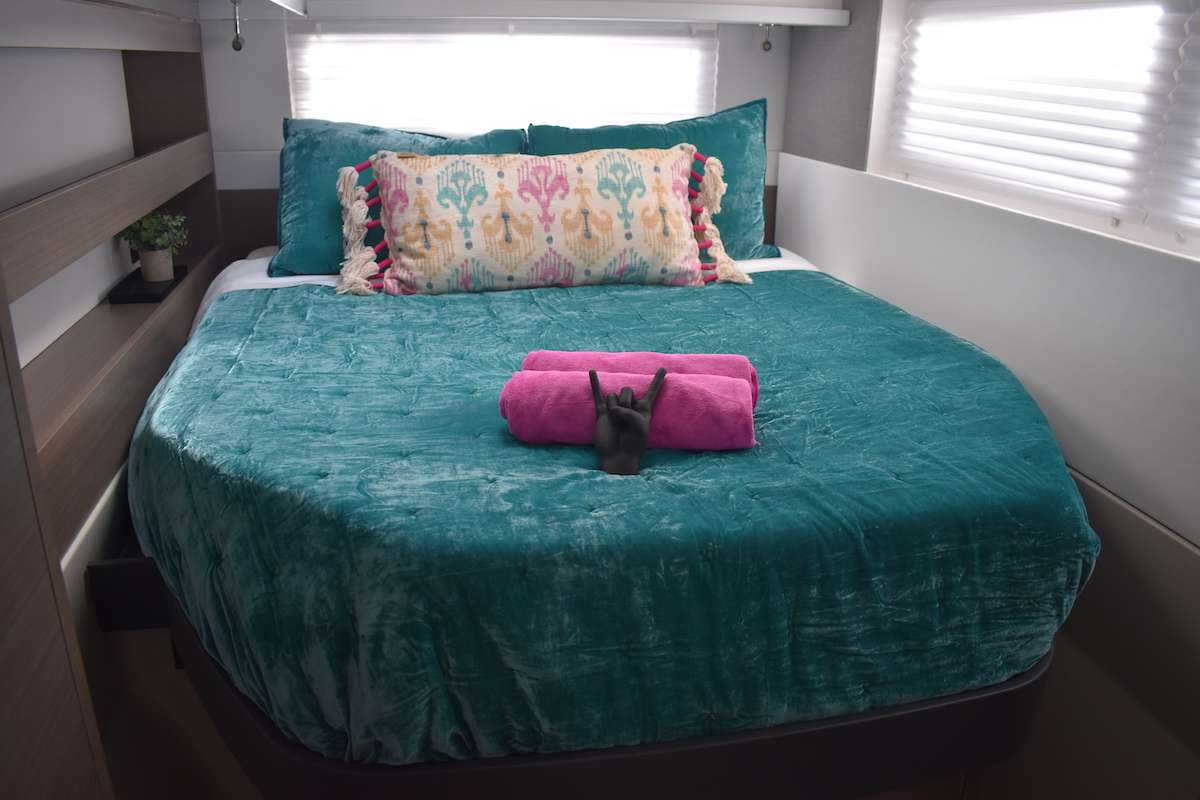 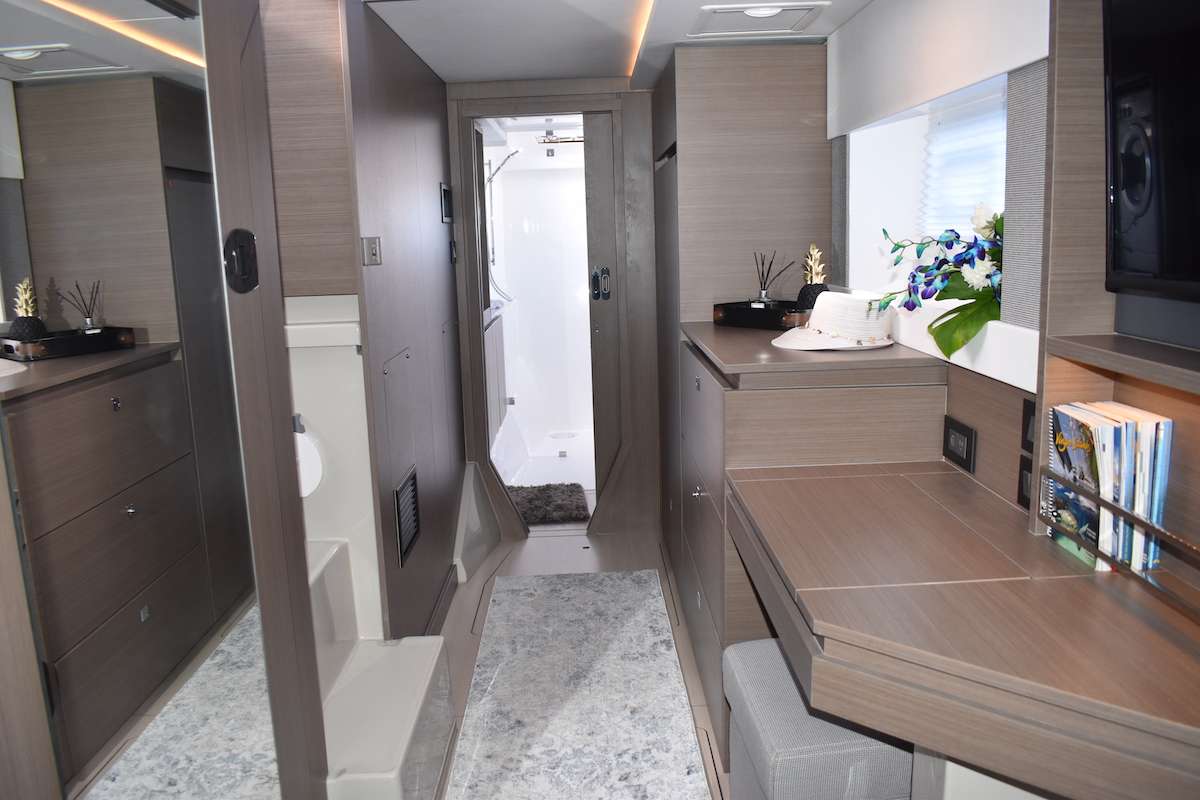 Leslie has a zest for life and loves meeting new people. She believes that strangers are just friends that she hasn’t met yet. She enjoys exercising, telling stories, traveling and planning the next adventure.

Leslie was born in Nebraska, grew up in Virginia and returned home to “The Good Life”. This is where she met her husband R.J., at a Nebraska Football tailgate. Their first adventure together was to the British Virgin Islands where they fell in love with each other and the boating life.

Her real calling was to be a rockstar but instead she became a nurse :). Leslie worked in surgery, trauma and then as an Oncology nurse. More recently, she has joined R.J. in their business doing occupational nursing and safety training.

She is considered by many, as a rainmaker. She can take an idea and run with it.

She enjoys cooking for friends and family. She has taken the Rouxbe Culinary course, studied in Thailand and is attending Yacht Chef training in London.

Leslie has two children and one amazing grandchild.

R.J.’s purpose is to have fun and live a life of adventure with passion while inspiring others. He grew up in Lincoln, NE and obtained a BS degree from Oklahoma State University and now owns a business in his hometown.

He is often quoted as saying “we only live once, let’s do it right”. He loves a new adventure and really is a genuinely nice human. He is always smiling and willing to lend a helping hand, support, or a compliment. Leslie has often been asked if RJ really is as nice as he seems and the answer is undeniably, Yes! He really is.

Sailing and boating have been a big part of R.J.’s life as he has lived on a lake for the last 22 years. With a motorboat and sailboat in the backyard, it has been a lifestyle rather than just a hobby.

RJ and Leslie have shared many adventures over the years including fun trips like the Oktoberfest in Munich, Songkran in Thailand and the Sturgis motorcycle rally in South Dakota. They too are very involved in multiple ongoing fundraisers and philanthropic activities.

Their boat BelieveN came from such travels. Her red “N” pays homage to their Nebraska roots. They named her BelieveN, as a reminder to Believe in yourself. Pursue your dreams. Know that you are worth it. Take the leap. Sing the song. Make friends. Live a life – don’t just live. And whatever else you put your mind to, just don’t stop BelieveN

Please come on down and experience the life in this magical part of the world with us!

What an amazing week on Tortuga! Jace and Mackenzie were a dynamic duo! They really were so attentive to every need and were so gracious and the BEST hosts we could ask for! Jace was an amazing and encouraging scuba MASTER diver. We really enjoyed our Cartanza wreck dive were out favorites and we got to see a turtle! Mackenzie is a natural host and cook. She made us some amazing meals, tasty and presented beautifully every night. Amazing sunsets every night, great cocktails, always the perfect little coves to anchor for the night. All the things we will remember - lots of memories made abroad this week.

One of our best vacations ever! Everything was perfect. The boat, the locations, the weather, the food the snorkeling, subs all were amazing. Jace and Mackenzie were the greatest hosts and made this all possible. They were a terrific team and went above and beyond to make sure we had fun every day.

Jace was an excellent dive instructor and we had a great time exploring the reefs (finding different kinds of fish, turtles, eels, sharks, etc) We are excited to be scuba certified. Jace also was a great subbing driver :)

Mackenzie always made us feel welcome, and we loved all of our meals, snacks and cocktails. She made everything seem seamless, which made the vacation carefree.

This is a vacation that we will never forget. WE loved getting to know Jace and Mackenzie. We hope to sail with them again in the future!

We have had a wonderful time aboard! Captain Jace and First Mate Mackenzie have been the most wonderful hosts. So good with our kiddos. The food and drinks have been top notch. We are so impressed with their knowledge and expertise. This vacation has been a welcome relief to the daily stress of life. Thank you!!

We have had and an incredible week aboard Tortuga. This was our third and hands down the best experience yet in the Virgin Islands thanks to Jace and Mackenzie. They provided delicious meals, drinks, sunsets, hikes, diving excursions, and conversation.

Words cannot express how grateful we are for this beautiful week! Jace certified our 12 year old to dive and showed us some incredible underwater wonders along the way. Between dives we had some lovely sails, fun tours on the sub wing, spike ball contests, snorkeled with turtles, hiked pretty view points, floated with drinks, paddle boarded and ate like kings.

We enjoyed every minute with these beautiful people and this beautiful place!