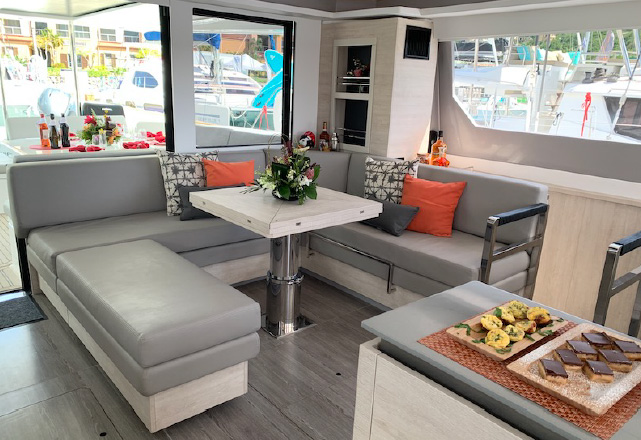 Their crew is carefully selected and they work exclusively for them, always on the same boat during the entire season, in many cases, for several seasons. Collin and Corinne, owners of &Beyond Yacht Charters, trust fully in their nautical skills, their credentials guarantee it, but they also know that they have great people who they love what they do and that they are very happy sharing with others. They come from different parts of the world, but they all agree in love for their lifestyle and the word that stands out in each of the interviews is ?freedom?. The freedom they feel when they navigate, when they discover a different wonder at sea, when they witness new postcards every day, when they touch the deck of their yacht with their bare feet and on especially when they see the happiness on the faces of their guests.

Keagan and Olivia are the crew of the Sea Dog yacht, two young men with a wealth of sailing experience who love to meet people and quickly make their guests feel like they’ve known them for years. They both always lived near the water and boats since they were kids, but they never thought that their life would be what it is today. Keagan lived in South Africa and when he chose a profession, he knew that offices were not his thing, so he decided to become a captain. As a teenager Olivia went on vacation to the Virgin Islands and fell in love with the place and the lifestyle, her love for the sea and sailing was born there, but she only knew that she would dedicate herself to this when she met Keagan and they planned this life together. The itineraries are totally tailor-made with the information they receive about the preferences of their guests, they never do exactly the same route, depending on whether they want to visit more tourist sites or a trip with a lot of tranquility and contact with nature… there is always a new place to find secret beaches and unique places.

Olivia ama cocinar y se evidencia en la expresión de felicidad de sus huéspedes. Una de sus especialidades es el pollo al curry que es su sello de bienvenida en la primera noche.
which is the welcome stamp from her on the first night. She likes the Mexican-Asian fusion, the mixture of flavors, textures and colors, while she creates healthy dishes including seasonal vegetables to have enough energy for the activities that she raises the day. When talking about special experiences that she lived, it is difficult for them to find one among so many, but they remember that time that after a small storm the sun came out and a hundred dolphins accompanied them on the last journey to the port.They had never seen so many dolphins together. Her guests are usually people who are under stress all year round, spend a week at Sea Dog with them and reach unimaginable levels of relaxation. This was the experience for a client who told them that she had had her first uninterrupted night’s sleep in 20 years!

Jake and Stephanie are the crew of the Dreamcatcher yacht. They met 12 years ago and have been living on boats for 5 years. What they love most about their life at sea is the possibility that this job gives them to meet people from all over the world. Last season they had 96 guests on board and they feel like they have 96 new friends. Stephanie grew up in a house Italian roots where everyone cooked, always received people and expressed their love through food. For her it is something very natural in what he puts a lot of love. She tries to put together a menu according to the preferences of each guest. Her specialty is the slow-cooked beef, the Roman porchetta, and the lobster that Jake catches right out of the sea. every crew proposes a different experience and this is certainly the case with Jake and Stephanie, since there are actually four crew members if We counted the two dogs on board, Parker (10 months) and Daisy (7 years). The dogs are a very special part of the experience and the The &Beyond Yacht Charters team always makes sure their guests love these four-legged crew. The families with children are the ones that most request this crew. Both were trained to behave on board, they play when guests want to interact with them and relax on deck or take a swim when the itinerary calls for it. One of Jake and Stephanie’s favorite experiences to surprise their guests is swimming with bioluminescence. Some Guests don’t feel safe swimming or snorkeling in the dark, but trust them and when they find these tiny lights illuminating the sea and generating a magical effect in the water they immediately understand that it was worth it and that they will never forget it. Another of her favorite anecdotes was that of a woman who wanted to see a turtle in the sea, but the sea sometimes brings us better surprises than we wanted… to her surprise, a dolphin approached and swam for 20 minutes with her. What perhaps best describes this crew is the show they created two years ago: ?Dreams come True?. They reserve two weeks of navigation to offer it free of charge to people who could not afford it. This is how they had the immense pleasure of doing it for a single mother with her son from St. Thomas or a person with terminal cancer from California. Those are the most special weeks for them, where they learn the most from their guests. They are experiences that make them grow as people and mark them forever. This beautiful example could be explained in Jake’s life motto ?Be part of those acts of kindness that you wish you saw more often in the world?.

The crew of the Three Sisters yacht is certainly special as they are both captains. Heiko, born in Germany, left in 2014 his Career in IT to dedicate himself to traveling and sailing. Rebecca grew up in New York, but traded the concrete jungle for jungles of truth and crystal clear water floors. She speaks perfect Spanish and loves being able to practice every time she hosts guests from speak Spanish. What they love most about her work and her life at sea is waking up every morning with that wonderful view and living outdoors, change places every day and receive people, whether they are groups of friends or a couple on a romantic trip. The next season a new challenge awaits you aboard one of the boats recently incorporated into the Mota de & Beyond Yacht Charters, with which they will make itineraries in the American and British Virgin Islands. The most magical moments of their itineraries include unique places like Waterland Bay where everything is nature and one of the best areas for snorkeling or that secret spot on St. John where you can swim with lots of turtles. Rebecca is a PADI Instructor and loves the challenge of accompany those who want to dive, but are afraid or have not practiced it for a long time. With her it is a very natural and relaxed. If they need her to hold their hand, she will do so throughout the experience. The reward will be the face of happiness and amazement of her guests admiring the underwater beauty that includes turtles, eagle rays, sharks, etc. Heiko is a freediving or apnea master and can guide guests who want to experience this type of diving. He has taught this technique to children and 60-year-olds. Everyone can according to the possibilities of him and have time to spare to adapt to the needs of each person. They can go down 10 to 15 meters in 2 days and the general comment later to experience it is: why didn’t I do it before! They are the ideal crew for those seeking outdoor and water activities, especially diving. It is also the perfect alternative for vegetarians and vegans, as they both enjoy this type of food and Rebecca cooks delicacies adapting to the preferences of the guests.

The mission of & Beyond Yacht Charters is that its guests not only have a wonderful vacation, but also also discover something else about themselves that will positively change different aspects of their lives forever. This It wouldn’t be possible without a crew that shares the company’s values and passion.

Get updates and learn from the best 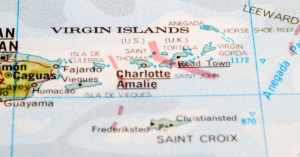 One of the most frequently asked questions we receive is, ?What?s the difference between the US Virgin Islands vs the British Virgin Islands?? If you?ve 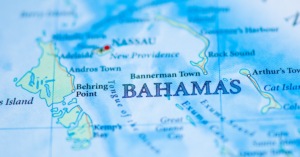 Looking to explore new seas in 2023? We?re excited to share that one of the biggest yachts in our fleet – Yacht Laysan – is